Fairfield Rising may be a relatively unknown campaign here at Fairfield, but it has a huge influence on the campus and the facilities that students receive.

Fairfield Rising is a campaign for the school to raise funds to put into projects to improve and better the facilities, according to Wally Halas, the Vice President of University Advancement. Hallas explained Fairfield Rising as, “An announced fundraising effort of the University to achieve goals that it couldn’t ordinarily achieve with just tuition. It allows you to raise money for the extra things, and it helps universities build or obtain things that it otherwise couldn’t.”

“More than 30 percent of our alumni population have already given to the Fairfield Rising campaign,” Halas added. 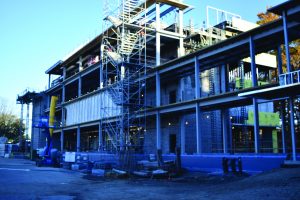 Renovations on the Marion Peckham Egan School of Nursing and Health Studies is one of the major ongoing projects of Fairfield Rising.
Catherine Veschi/The Mirror

So where is all this money going exactly? According to Halas, some of the recent and in-progress projects on campus included the RecPlex, which cost $21 million, Rafferty Stadium, which cost about $9 million and the new Nursing and Health Studies building, to be finished by next fall, and is expected to cost $31 million.

Some of the facilities that we enjoy everyday on campus are results of previous campaigns that were similar to Fairfield Rising. If you’ve enjoyed a show in the Regina A. Quick Center for the Arts, studied in the DiMenna-Nyselius Library or worshipped in the Egan Chapel of St. Ignatius Loyola, you’ve enjoyed the products of the Our Promise: The Campaign for Fairfield, which was launched back in 2000, according to News@Fairfield.

When Victoria Silvestri ‘19 was asked if she knew about Fairfield Rising, she shook her head and explained that she had “no idea” what the campaign was about. Freshman Taylor Lucas responded similarly, saying that she had never heard of the campaign.

However, Liz Szabo ‘17 said that Fairfield Rising is “a great thing.”

“The school has been using it for things like scholarships and making new buildings that needed to be redone,” said Szabo. “The gym before was small and gross … I think we need more parking areas, but that’s in the plan in the future as well.”

Szabo also explained that she knew of the campaign, just not its title, which may explain why some students feel unaware.

Halas explained that there are “four pillars” to Fairfield Rising that determine what is done with the money raised. These four pillars are endowment for scholarships, academic endowment and endowment programs, current use and facilities.

Endowment for scholarships is the money that the school gives to students to help them afford their college education. 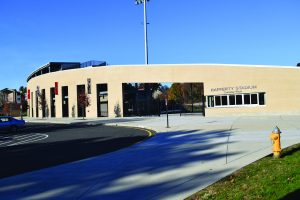 Rafferty Stadium was one of the Fairfield Rising projects that was completed in 2015.
Catherine Veschi/The Mirror

“We want to be able to offer as much financial aid as we can to as many students as we can,” said Halas. This money is crucial to many students attending college, who cannot afford it otherwise, Halas added.

According to Halas, academic endowment is money that “help us to both recruit and retain top-notch faculty.” Endowment programs included one by Judge Maryanne Trump Barry, the sister of President-elect Donald Trump, who “gave a gift of four million dollars: one million to scholarship and three million dollars to the center for Ignatian spirituality.”

According to Halas, current use refers to donations “to areas that need it most.” Donations can be used in practically any area, from musical equipment to helping fund students who want to study abroad.

The fourth and final “pillar” is facilities. Some more recent facility improvements are Rafferty Stadium, which is mostly used by varsity athletes, and the Leslie C. Quick Recreational Complex, which is for all students.

“It’s recreation for all students; we don’t want people to think we’re just doing things for athletics … this is for all students,” explained Halas.
However, the RecPlex isn’t the end of the Fairfield Rising campaign.

There are various projects on the horizon for Fairfield Rising. The first is a parking garage over the current parking lot of the Aloysius P. Kelley Center. According to the Fall 2016 edition of the Fairfield University Magazine, the lot will go from only fitting 137 vehicles, to fitting 380. The project is expected to be completed by Fall 2017 and the extra parking will be for prospective students and their families during visits, as well as for sporting events. After that, the expansion of the John A. Barone Campus Center is expected to be complete by Fall 2018, which will include a larger dining hall space, a possible new coffee shop in addition to Einstein’s and a larger and more open Oak Room.

Simultaneously, a new residence hall will be built with the estimated completion of August 2018. It will accommodate 220 freshmen and sophomores, and will be built behind Gonzaga Hall. Some other possible future projects include a larger and renovated Dolan School of Business and a renovated Alumni Hall.

“We know that if we make the experience for students better, they’ll be better people when they get out,” said Halas. “They’ll be better educated, they’ll have incredible values in life that they’re going to live by, they’ll be great citizens of the world and proud alumni of the University.”