Some say three is a magic number. On Monday, Jan. 29, the Fairfield University men’s basketball team defeated Metro Atlantic Athletic Conference foe Iona College in overtime 103-100, winning by a slim three-point edge. Senior Tyler Nelson could not miss from the field, as he lead all scorers in the contest with 32 points while also landing himself at No. 3 on the all-time career scoring list in Fairfield University Men’s Basketball history with a total of 1,888 career points. Even though three points were the difference in Monday’s nail-biter of a contest, the real difference that led the Stags to victory was their near perfect execution and impeccable teamwork; no magic necessary. 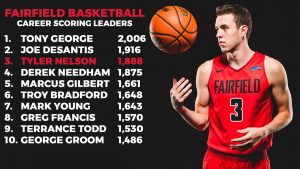 From the start of the game, the Stags stayed right with the Gaels following every basket by Iona with one of their own. While five Stags scored in double figures, each player stepped up when called upon during the contest. The way the Stags moved the ball and utilized the entirety of the court made for open looks on the wings, as well as openings in the key for easy layups. First-year Omar El-Sheikh shined in the post when the Stags needed it the most, scoring all 15 of his points in the second half. First-years Ferron Flavors Jr. and Aidas Kavaliauskas’s three-pointers came in clutch for the Stags, along with Kavaliauskas’ double double of 10 points and 12 assists. Kavaliauskas’ court vision helped deliver the ball to Jonathan Kasibabu ‘19 in the paint, who added 10 points for the Stags.

The first half winded down at a standstill for almost four minutes with Fairfield leading 37-35. With a floater three-pointer by Nelson that did not count for the Stags, the score at the half ended with Iona in the lead, 42-37.

As hard as Fairfield continued to fight, with 10 minutes left in the second half, Iona began to pull away, making the score 70-61. Undaunted, two minutes later Fairfield tied it up at 70. After minutes of trailing Iona, Fairfield pushed through, again tying the game at 85. As any good shooter knows, just because you miss a shot does not mean you stop shooting. Regardless of the setbacks that were thrown at the Stags, they continued to fight their hardest. When Nelson missed what could have been the game-winning three-pointer at the end of the second half, he came back in overtime making 7 of 8 free throws, sending the Stags to victory.

Nothing in Monday night’s game was handed to the Stags. Every play, every shot and every defensive victory the Stags made was earned. At any point in that game, each one of them could have hung their heads and accepted defeat, but they did the opposite. They rallied around each other, played selflessly and played with the most dedication and heart they could. It was a hard-fought win for Fairfield (8-13, 3-7 MAAC) to triumph over the Gaels (13-9, 7-3 MAAC), the fourth seeded team in the conference. The Stags will look to carry the momentum and win their second consecutive conference matchup as they travel on Friday, Feb. 2 to take on MAAC foe Monmouth University. 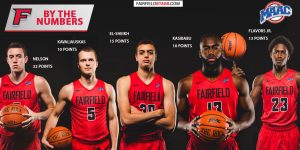