The men’s basketball team grinded out a tough 69-67 win over conference rival Rider University on Monday, Feb 13. Instead of the usual home venue of Webster Bank Arena in Bridgeport, the game was held on campus at George Bicassa Court in Alumni Hall. The smaller venue provided the stags with a more energized and louder crowd that made all the difference in such a close game.

After winning the tip off, the Stags were able to capitalize on their first possession, as Jerry Johnson ‘19 hit a three-point shot less than 30 seconds into the game. Johnson had a very productive night, going 5-9 with all of his shots coming from three-point range.

The first 10 minutes of the game were intense, with no team gaining more than a one possession lead. Rider then awoke with their most dominant stretch of the game, going on a 10-0 run to gain a 24-18 lead in less than three minutes before forcing a Fairfield timeout with 6:56 remaining in the half. 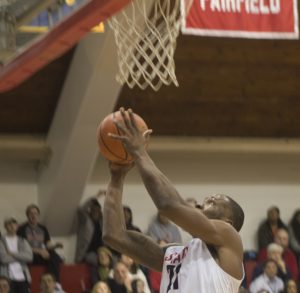 From there, Rider was almost able to match Fairfield point-for-point for the rest of the way taking a 41-37 lead into halftime. The Stags did not put forth their best defensive performance in the first half as Rider was able to shoot 48 percent as a team including a whooping 63 percent from three-point range. “[the team] embraced the fact that we were going to have to play team defense in order to get some stops,” said head coach Sydney Johnson on the Stags halftime adjustment. “I was literally screaming ‘Defense! Defense! Defense’ and they responded pretty well,” Johnson remarked.

And respond the Stags did, as they came out and played an inspired second half of defense. The Stags started the second half as they did the first, with a Johnson three-point shot, but after that, it was the inspired play of graduate student Amadou Sidibe that rallied the team. Sidibe would go on to score eight-straight points and the Stags took a 48-47 lead with 14:52 left in the game. Sidibe would go on to finish the game with a double-double as he registered 12 points, while grabbing 10 rebounds, good for his eighth double-double of the year.

The two teams continued to fight, with neither side able to gain a lead of more than two points. Then with little more than four minutes left, Rider was able to score six points rapidly, with two three-point shots sandwiching a Fairfield turnover to give Rider a 67-61 lead.

From here, Fairfield was able to make quite the rally. Two three-point shots along with some inspired defense got the game tied at 67. Then with little over a minute to play, Tyler Nelson ‘18 stepped back and drained what was inevitably the game-winning jump shot. “We put the play in at practice just the other day,” said Nelson on his go ahead basket. “I got a good look and it went in.” From there, the Stags needed a handful of defensive stops and they got them. Junior Jerome Segura got a steal with 54 seconds remaining and Sidibe blocked a shot at the buzzer to secure the win. With the win, the Stags improve to 13-11 on the year and 8-7 in Metro Atlantic Athletic Conference play. With less than two weeks remaining in the regular season, the Stags will work hard in an attempt to secure a high seed for the MAAC tournament as Stags look to carry the momentum from Alumni Hall when they travel to take on Quinnipiac University on Feb. 17.