There is nothing better in sports than a good old fashioned rivalry. Since the creation of the Metro Atlantic Athletic Conference in 1981, the Stags and the Iona Gaels have battled on the basketball court 84 times, with Fairfield picking up their 56th win in the series on the afternoon of Dec. 4. From the tip, the Stags were sharp as can be in their convincing 69-58 triumph over the reigning MAAC champions. 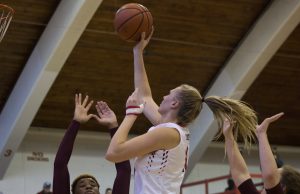 It was clear from the start that there was no love lost between these two conference powers. The Stags knew that they must squash the hype surrounding Iona and create buzz around themselves. The hot shooting of Samantha Cooper ‘18 and dominant defense from seniors Casey Smith and Kristine Miller, Fairfield jumped out to a 15-8 lead to end the first quarter.

The second quarter brought much of the same for Stag fans as the red and white continued their inspired play throughout the second frame. While Iona’s offense was sputtering, Fairfield was on a roll, led by the play of Smith and Kelsey Carey ‘17. However, what was once a 13-point lead with just under two minutes left to play was closed to an eight-point deficit at the end of the period due in large part to some careless Stag turnovers and fouls.

Coming out of the halftime break down 25-17, the Gaels now had hope to make a comeback. While the Stags kept Iona at arms distance for much of the third quarter, their rival would not go away as the three balls started to fall and the bench stepped up. By the time the clock struck zeroes at the end of 30 minutes, it was 45-39 and Iona had the momentum.

Only the team knows what was said in the huddle at the break, but Fairfield came out with a competitive spirit in the fourth quarter that Iona could not match. Whenever the Gaels would hit a clutch three-pointer to pull them within striking distance, the duo of Smith and Carey would make a big play to keep them at bay. The fellow All-MAAC performers combined for 15-fourth quarter points to send the Stag faithful cheering on a 69-58 victory against the favored Gaels.

Smith ended the game with 21 points, while Carey threw up a monstrous double-double in 17 points and 12 rebounds. Cooper also made her presence known for the Stags as the redshirt chipped in 13 points for the game. 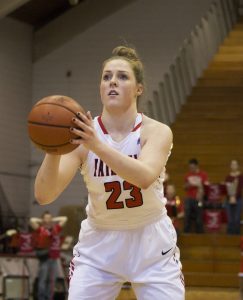 After being bested by Iona in their two previous contests, head coach Joe Frager was more than happy for his team to be on the winning end of the highly contested conference matchup.

“Iona is an outstanding team [that] is as well coached and as talented as anyone in the league,” said Frager. “This was a huge, huge win for us and I am very proud of the girls.”

Winning a game like this one shows that this year’s version of the Stags has the mettle to hang with any team in the MAAC. For Smith, a complete win against an experienced Iona team gives the squad a much needed confidence boost.

“We have a lot of balance this year,” said Smith. “A lot of people can score, rebound and pass well, so it is great when everybody is playing their best on the court and contributing.”

Nonetheless, as we all know, everything this year begins and ends with Smith and Carey, and Sunday afternoon, they were both remarkable.

“Smitty and Kelsey made some big baskets for us today,” said Frager. “That lifts everybody’s spirits and sometimes when you knock a shot down on offense, it picks you up defensively on the other end.”

Everything came together on Sunday to give the Stags a victory that they will not soon forget. For Frager and the bunch, the win is hopefully just the start of a magical year.