In the game of basketball, one opportunity can change the whole game and that’s exactly what happened on Thursday, Jan. 26 when Monmouth’s Kayla Shaw connected on a three-pointer at the buzzer to send the game to overtime. Fairfield led by as much as 13, but it was not enough to hold off the Monmouth Hawks’ comeback as they battled back to force the game to overtime and shut out the Stags offense to run away with the road win. “This was completely on us,” said head coach Joe Frager, “[I] give Monmouth credit, they made big shots but we didn’t deserve this basketball game today.”

Both teams struggled to start the game, only combining for 12 points halfway through the first quarter of play. Slowly, the visiting team started pulling away after connecting on a couple shots beyond the arc to give them the 17-13 advantage after one quarter of play. Monmouth’s Tyese Purvis proved to be a problem early on for the Stags as she recorded eight quick first quarter points on 3-4 shooting.

Just one quarter after allowing a total of 17 points to the Hawks, Fairfield clamped down on defense, limiting Monmouth’s scoring to just four in the second quarter. While Monmouth struggled to get the ball through the basket, Casey Smith ‘17 started to find her shot from the field as she finished the half shooting 5-8 for 12 points and 5 rebounds. The Stags finished the quarter on a 14-4 run to head into the half with a 27-21 advantage. 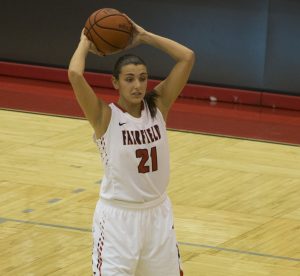 Fairfield carried the momentum into the second half of play as the Stags converted on consecutive layups coming off the hands of Kelsey Carey ‘17, Kendra Landy ‘19 and Samantha Cooper ‘18 to start off the half. Just five minutes into the third quarter, Fairfield had its largest advantage of the game as they led by 13 with a score of 37-24.

Following a media timeout, the momentum was slowly shifting over to the opposing team as Fairfield’s struggles began. The Stags struggled to convert from the field while also giving up 17 consecutive rebounds to the Hawks and committing a couple of turnovers, which Monmouth converted into easy points in transition. The Hawks would go on a 12-0 run to close out the third quarter as they now trailed by only one, 37-36.

Cooper ended the eight-minute scoring drought for the Stags when she connected on a layup to regain the lead. Despite Fairfield’s late struggles, they still held a five-point lead with 33 seconds remaining in regulation after Carey sank a jumper.

With just 17 seconds left in the game, the Stags fouled Monmouth’s Purvis on a three-point attempt, forcing her to the line where she could narrow the lead back down to just two and Purvis did just that as she sank in all three shots from the charity stripe.

The very next possession saw the Hawks send the Stags to the free throw line where they had the opportunity to seal the game by making it a two possession game, but split the free throws, giving one final opportunity to the Hawks to tie the game with less than 15 seconds left. In the final possession of regulation, Monmouth was able to find Shaw open from beyond the arc, which she connected at the buzzer to send the game into overtime tied at 50.

The overtime period was all Monmouth as Fairfield’s struggles continued. The Stags were limited to only one field goal as the Hawks would close out the game on a 10-3 run to pull off the comeback and win on the road by a final score of 60-53.

Monmouth’s Purvis lead all scorers with 22 points while Alexa Middleton set a career-high with a game-high 16 rebounds. Monmouth out-rebounded the Stags by a total of 56-38.

Smith lead the way for the Stags with a game-high of 20 points and 10 rebounds for her third career double-double. When asked about what the team must do next time out, Smith said “to get back in the gym tomorrow, figure it out and just get back to work.” She added, “we need to execute better in the second half, if we follow what coach draws up x’s and o’s wise, we’ll be alright.”

The Stags look to bounce back after a heartbreaking loss on Sunday, Jan. 29 when they host Metro Atlantic Athletic Conference rival the Purple Eagles of Niagara University.