Long Beach is the place to be on the hottest Long Island summer days and June 11 dawned one of the hottest since 2017 began. Yet the unrelenting sun and melting temperatures did not stop thousands of people from streaming onto the “City by the Sea’s” hot sands and famed boardwalk for pop singer and LGTBQ community advocate Rachel Platten’s Long Island Pride 2017 closing concert.

On the anniversary of the 2016 Orlando shooting and with the anniversary of her musical tribute to the Orlando victims at the 2016 Trailblazer Honors rapidly approaching, Rachel Platten took the beach by hurricane bounding onto the stage and directly into a soul rendering performance of her hit song, “Stand by You.” With only a few notes, the mood of the crowds flooding the boardwalk and surrounding beach transformed from a state of growing discontent from a long wait in the hot sun into one of excitement, unity and joy. As her first song came to a close, Platten had everyone in attendance dancing and she continuously upheld energy throughout the concert through crowd dance contests and the first performance of her never-before-heard song, “Whole Heart.” 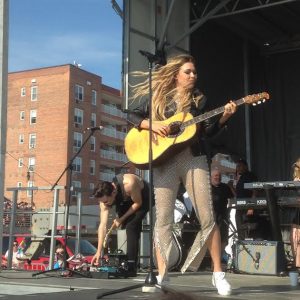 Despite this unexpected reveal, which most would think would be the peak of Platten’s performance, the concert only continued to improve. During her song “Better Place,” the young artist transformed the excited energy she had built in the audience and with a few words and a subtle movement, she guided it toward love. A moment before the crowd had been bounding and cheering, but now audience members were taking those they cared about, regardless of gender or sexuality and using her performance to share with those they loved how deeply they cared for one another. Be they “best friends, husband and husband, wife and wife, boyfriend and girlfriend, siblings, or parent and children.”

Some humorous moments also presented themselves during the concert. Due to the hot weather, it seems that Platten’s microphone refused to remain attached to her outfit, resulting in the singer needing to continue performing while varying members of her and the Long Beach staff reattached her microphone. The humor continued as, during a heartfelt cover of Swedish House Mafia’s “Don’t You Worry Child,” Platten had to resort to the help of the audience and a member of her staff’s phone to recall a section of the lyrics — an incident she profusely apologized for afterwards, though she took it all in stride and only put more effort into her closing number  — “Fight Song.”

“If there is something in your heart that people are telling you that it isn’t possible for you to do. F*** that! It’s not impossible. Do it!” Platten exclaimed before beginning.She was immediately joined, be it vocally or in spirit, by the entirety of the audience as her lyrics echoed across Long Beach. The performance of this LGTBQ rallying cry acted as a unifying force as fans of Platten’s who traveled from as far off as Canada or as near as the apartment building next to the stage joined with those who had never even heard the singer’s name before to dance, sing and support one another. 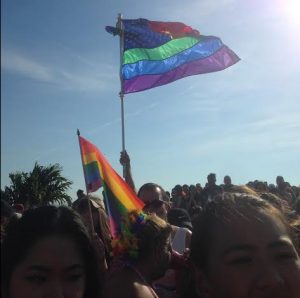 This concert was not one to miss for any age group, and people young and old were in attendance as the string of concerts leading up to Platten’s performance were preceded by the 2017 Pride Parade, as well as a Memorial Paddle out in remembrance of the Orlando shooting. During her performance, Rachel Platten acted as the cumulative force of the entire Long Island Pride weekend as she spread her message to be true to yourself, fight for what you believe in and to always stand by those you love.