The 140th iteration of the Championships at Wimbledon in London, England proved to be full of unexpected twists and turns, as well as some familiar faces finding success at tennis’ most famous stage once again.

By far the biggest story of this year’s tournament was Roger Federer’s domination over Marin Cilic in the gentlemen’s singles final on Sunday, July 16 to claim tennis’ most prestigious trophy for a record eighth time. With a lopsided scoreline of 6-3 6-1 6-4, Federer further asserted himself as the greatest tennis player of all time, recording his 19th major title. With his victory at Wimbledon, Federer increased the gap in major titles won between him and his long-time rival, Rafa Nadal, who won his 15th major title at this year’s Roland Garros.

In order to better his performance at Wimbledon, the 35-year-old “Swiss Maestro” chose not to participate in this year’s Roland Garros, a tournament which he historically hasn’t performed well at. While fans may have been surprised at this decision, Federer’s overwhelming success during the fortnight proved that making adjustments like this to his tournament schedule is strategic as he gets older and nearer to retirement. 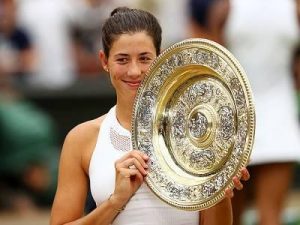 Not only did Federer’s victory further his dominance at Wimbledon and in the tennis world overall, but it also furthered the dominance of tennis’ “big four,” Federer, Nadal, Novak Djokovic and Andy Murray, at the grand slams. Ever since Federer won Wimbledon for the first time in 2003, a member of the “big four” has won at the All England Club, making 2017 the 14th straight year this has happened. The “big four’s” dominance has been evident at many grand slams and smaller tournaments, with only a few players being able to accumulate grand slam victories in the past decade. While many tennis commentators have begun to question how long their reign will last, as all members of the “big four” are in their thirties now, Federer’s victory at Wimbledon has shown once again that this group isn’t ready to loosen their hold on the tennis world.

Federer’s prey in the Wimbledon final, Marin Cilic, is one of the few players who’s been able to challenge the “big four” in recent years, with his first grand slam victory coming at the 2014 U.S. Open. Despite losing to Federer in the final, Cilic’s success at this year’s Wimbledon is proof to the tennis world that he isn’t just a one-slam-wonder and certainly has the potential to challenge tennis’ elite during upcoming grand slams.

On the women’s side of the draw, Serena Williams’ ongoing absence from the tennis world has proven to be beneficial for some of her biggest competitors, such as the young Spaniard Garbiñe Muguruza, her own sister Venus Williams and top five players Karolina Pliskova and Simona Halep. Despite an abysmal first half of her 2017 season, Muguruza was able to alter the path of the remainder of her 2017 season by claiming the ladies singles title at this year’s Wimbledon. With a 7-5 6-0 victory over Venus Williams, Muguruza was able to acquire her second grand slam title, after defeating Serena at last year’s Roland Garros. Muguruza’s maiden Wimbledon title appears to be the Spaniard’s conclusion to the “sophomore slump” she faced after winning her first grand slam title last year and looks to be the start of a bright future for the 23-year-old. 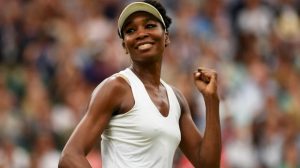 Despite the disappointment that she was unable to add another title to her glowing resumé, Venus should be happy with her performance at this year’s Wimbledon and her 2017 season as a whole. With final finishes at both the Australian Open and Wimbledon this year, Venus has plenty to be satisfied with. Further, this year’s Wimbledon marked the first time Venus has reached the final at the All England Club since 2009, proving that she can still have success on the famous grass courts, even at the age of 37.

Another highlight on the women’s side of the draw was in the battle for world No. 1., as after falling short of this achievement at Roland Garros a few weeks ago, Simona Halep looked to finally reach this milestone at Wimbledon. However, with her quarterfinal loss to British No. 1 Johanna Konta, Halep fell short of world No. 1 once more, allowing Karolina Pliskova to claim the top ranking, despite losing to the unseeded Magdalena Rybarikova in the third round. However, with the top three players, Pliskova, Halep and Angelique Kerber, so close in ranking points currently, we can expect to see further ranking shifts as the year progresses.

Konta’s run to the semifinals was another highlight of the women’s draw, as despite losing to Venus in the semis, she became the first British female since Virginia Wade in 1978 to make it this far at her home slam. 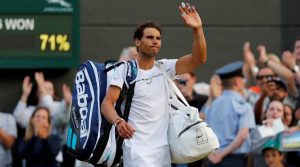 Rafa Nadal’s fourth round exit after a marathon match with Gilles Muller was one of several unexpected early-round exits at Wimbledon.

Lastly, amid the success of Federer at Wimbledon, his fellow “big four” members were less fortunate during the fortnight. Nadal’s poor results at the lone grass court grand slam continued this year, as he was upset by No. 16 seed Gilles Muller in the round of 16. Nadal has not reached the quarterfinals at Wimbledon since his finals run in 2011. Additionally, Murray failed to defend his title at Wimbledon, losing in the quarterfinals to American Sam Querrey, who became the first American male since Andy Roddick in 2009 to make it to the semifinals at any grand slam. Djokovic’s injury-plagued 2017 season continued as he was forced to retire from his quarterfinal match with Tomas Berdych with an elbow injury after going down 6-7 0-2 to the world No. 15 and former Wimbledon finalist.

With the continued success of Federer and Venus in 2017 and Muguruza’s return to the winning circle, the tennis world can’t help but be excited to see what 2017’s final grand slam, the U.S. Open, has to offer.