A battle between two adored artists, heartwarming tributes to musical icons and numerous showstopping performances took over the stage at the Grammy Awards on Sunday, Feb. 12. Whether you like to listen to pop, country, rap or anything in between, the 2017 Grammys, held in Los Angeles, Calif., provided viewers with an entertaining night of performances by famous artists such as Adele, Katy Perry, Bruno Mars and Carrie Underwood.

Audience members had their eyes on Beyoncé throughout the night, as she was the top nominee of the night with a total of nine nominations. She went home with a total of only two wins, Best Urban Contemporary Album for “Lemonade” and Best Music Video for “Formation.” Even though Beyoncé didn’t win as many Grammys as anticipated, she still won the hearts of audience members for her performance of “Love Drought” and “Sandcastles.” Beyoncé took the stage with a glittering, sheer gown accompanied by a matching headdress. Not embarrassed by her twin baby bump, Beyoncé held her stomach throughout the performance with confidence. Dedicated to motherhood, Beyoncé’s artistically crafted performance received a standing ovation. 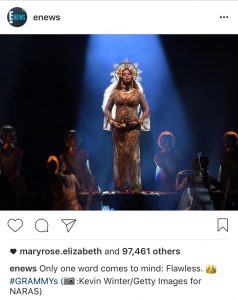 The battle between Beyoncé and Adele for numerous nominations, including album, record and song of the year, took precedent throughout the 2017 Grammys. After beating out Beyoncé for Best Pop Solo Performance, Adele looked as if she would sweep the competition, and she did. Adele clinched a win for Best Song of the Year with “Hello,” Best Record of the Year for “Hello” and Best Album of the Year for “25.” Adele gave a tear jerking speech after receiving the award for Best Album of the Year as she honored Beyoncé for her album “Lemonade” by describing it as monumental; she then proceeded to break her Grammy in half for Beyoncé to share — “Mean Girls” style. 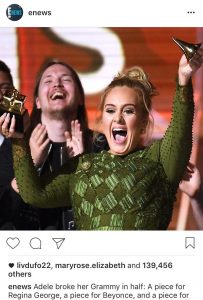 With Beyoncé taking the backseat at this year’s celebration, megastar Adele basked in the spotlight. Adele paid a beautiful tribute to George Michael, an English singer/songwriter best known for his singles “Wake Me Up Before You Go-Go” and “Faith.” Even though Adele stopped singing part way through the song after messing up, she finished strong and honored George Michael excellently.

Bruno Mars’s performance was also one to remember; he dedicated it to music industry icon Prince. Mars sang Prince’s song, “Let’s Go Crazy” in a flawless tribute to the artist. Adding a special flare to the performance, Mars dressed up exactly as Prince would. Mars sported a purple, sparkly suit — a bold move that proved successful as it showed the personal admiration he has for Prince. 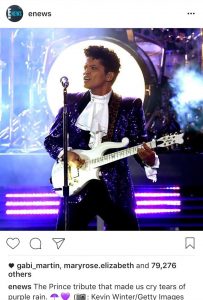 Another attraction of the night included Katy Perry’s performance of “Chained to the Rhythm,” where she sent a strong political message. Perry wore a white pantsuit and an armband that read “persist” which, according to the New York Times, was a reference to Senator Elizabeth Warren. The strength of her performance came at the end where she stood in front of a projection of the American Constitution.

Chance the Rapper, who, according to E! News is the first black rapper since 1999 to win Best New Artist, also shined at the Grammys. In addition to winning Best New Artist, Chance also took home Best Rap Album for “Coloring Book” and Best Rap Performance for “No Problem.” Giving a beautiful performance at the Grammys, Chance had audience members enthralled from start to finish with his songs “How Great” and “All We Got.” His performance started off with a slam poetry vibe and later erupted into a confident rap star performance.

Despite the successes of many artists and the beautiful performances and tributes made throughout the night, a couple familiar faces were absent from the 2017 Grammys. According to US Weekly, Justin Bieber — who was nominated for three Grammys — skipped out on the 2017 celebration because he, “doesn’t think the Grammys are relevant or representative, especially when it comes to young singers.” Bieber wasn’t the only one to ditch this year’s celebration; Kanye West was also missing. West vowed not to attend the Grammys if Frank Ocean’s album “Blonde” was not nominated, according to US Weekly. However, Kris Jenner is also quoted stating that West was absent due to his hectic schedule coming up for New York Fashion Week. Regardless of the reason for West’s absence, he was nominated for eight Grammys and his absence showed disrespect.

A melting pot of artists gather together each year to celebrate one thing —  the art of music. This year was no exception to this phenomenon and actually posed as a celebration to remember. When country artists choose to sing pop songs for the evening and when prestigious artists shake hands with newbies, a sense of mutual love radiates through the TV. From renown celebrities to budding singers, the 2017 Grammys showed nothing but honest respect during its 59th celebration.