Known as Hollywood’s biggest night of the year, The Academy Awards (The Oscars) honor the best movies, actors, producers and designers of the year’s best major motion pictures. What started off on a high note with Justin Timberlake opening the ceremony with his upbeat song, “Can’t Stop the Feeling,” the 2017 Oscars took a turn for the worst as Warren Beatty and Faye Dunaway read the wrong winner for Best Motion Picture. Dunaway announced that the winner for Best Motion Picture was “La La Land,” and the cast and crew took the stage to begin their speech. It wasn’t until the middle of their speech that an announcement was made about the mistake and that the actual winner of the Oscar was “Moonlight.”

Beatty had been handed an 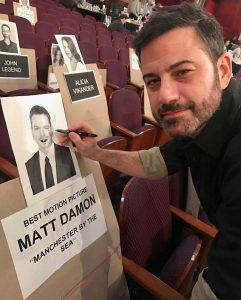 envelope that said “Emma Stone, ‘La La Land’,” which was the card used for the previous award of Best Supporting Actress. Oscar host Jimmy Kimmel tried to make light of the situation by shouting, “Warren, what did you do?” and later blamed Steve Harvey for his infamous mix up of the Miss Universe winner. Utilizing his comedic talents, Kimmel was able to somewhat save the catastrophe.

The closing of the show was not the only instance where Kimmel provided comedy; he also added political jabs throughout the evening and targeted specific actors and actresses to make fun of — particularly Matt Damon. The faux feud between Kimmel and Damon has been going on for years and the night of the Oscars was no exception. Earlier in the week Kimmel posted on social media a picture of himself defacing Matt Damon’s headshot that was hung on his assigned seat at the Dolby Theater (where the Oscars were held). He began his verbal jabs towards Damon by first insulting his widely-known role in “We Bought a Zoo,” describing his performance as “effortful.” Kimmel continued this mockery by saying, “Matt, as you probably know, could have starred in Manchester by the Sea. He handed what turned out to be an Oscar-caliber role over to his friend and made a Chinese ponytail movie instead.”

Horrifying mistakes and Kimmel’s comedy aside, the rest of the ceremony ran smoothly. Many viewers had their eyes on the movie “La La Land” as the film was nominated for a record total of 14 Academy Awards. Out of these 14, “La La Land” only took home six Oscars, some of which included: Best Supporting Actress for Emma Stone, Best Achievement in Directing for Damien Chazelle (the youngest director in history to win an Oscar) and Best Achievement in Music Written for Motion Pictures. Some major points of surprise during the night include: Mahershala Ali’s win for Best Supporting Actor in “Moonlight”, Casey Affleck’s win for Best Actor in “Manchester by the Sea” over Ryan Gosling in “La La Land” and of course “Moonlight’s” win over “La La Land” for Best Motion Picture. 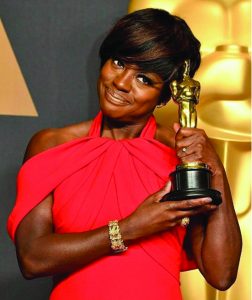 Another highlight of the evening was when Actress Viola Davis secured her first Oscar win for Best Supporting Actress for her role as Rose in the movie, “Fences.” Upon receiving her award, Davis offered beautiful insight. “There’s one place that all the people with the greatest potential are gathered — and that’s the graveyard,” she said. “People ask me all the time, what kind of stories do you want to tell? And I say, ‘Exhume those bodies. Exhume those stories.’ We are the only profession to celebrate what it means to live a life.”

In addition to memorable wins, the Oscars also showcased beautiful performances throughout the night. Disney lovers were captivated by Auli’i Cravalho’s performance of “How Far I’ll Go” from her part as Moana in “Moana.” The 16-year-old Auli’i graced the stage in a stunning red gown as dancers dressed in blue performed with large blue sheets in the background to give the illusion of water. If Auli’i felt any nerves for her first Oscar performance, they did not show. Even as one of the dancers hit Auli’i in the back of the head during her performance, it did not phase the actress as she continued on with the song beautifully.

Following Auili’ was Sting’s elegant performance of the Oscar nominated song “The Empty Chair.” This song was used in the movie “The James Foley Story” which was about war correspondent James Foley, who was captured and killed by ISIS. Sting’s performance of this song had the audience in complete silence as he graced the stage with nothing but his guitar and a stool. The only lighting of the stage was a tasteful spotlight that highlighted the singer. A powerful moment for Sting was at the conclusion of his performance when a quote from Foley appeared behind him on a projected screen, reading, “If I don’t have the moral courage to challenge authority … we don’t have journalism.”

Sting was not the only singer to pay tribute during the evening; however, Sara Bareilles took the stage in honor of actors, singers and producers that have passed away throughout the year. Taking the spotlight in an elegant silver gown, her appearance echoed the beauty of her performance. Bareilles sang Joni Mitchell’s “Both Sides Now” while images and videos of beloved actors and actresses were playing behind her. The performance could not have gone better for Bareilles as she brought many audience members to tears through her flawless execution of such a powerful song.

Even though “La La Land” did not take home as many awards as was anticipated, John Legend performed Oscar winning song, “City of Stars” from the movie “La La Land.” Although many would have preferred Gosling to have performed this song, as he does in the movie, Legend carried the performance well. He played the piano effortlessly as dancers accompanied him on the stage, recreating scenes from the movie. With the most props used throughout the evening, Legend’s performance included streetlamps, benches and a backdrop of night stars to set a beautiful scene. The performances even included two dancers descending from the ceiling and performing in the air to add another captivating element.

The Oscars provided entertainment from start to finish through granting awards to unexpected winners and through brilliant performances from a variety of singers. If it weren’t for the unfortunate mix-up of events at the conclusion of the night, the 2017 Oscars would have been a perfect evening.