The Stags recorded their fifth straight win, a 3-0 sweep over the visiting Gaels from Iona on Sept. 25. The Stags remain undefeated in Metro Atlantic Athletic Conference play, defeating teams including St. Peter’s, Rider, Manhattan and now Iona on their quest to defend the MAAC title.

It was an all around team effort with multiple Stags having big performances. Juniors Skylar Day and Sydney Buckley each had a double-double as they over-powered Iona. Day had 12 kills and 10 digs while Buckley dished out 17 assists and recorded 13 digs. Senior Megan O’Sullivan finished with 10 kills and Megan Theiller ‘18 added nine of her own.

Sophomore Kaitlyn Fisher and Mayda Garcia ‘20 each posted three and two kills, respectively to add to the Fairfield attack. Freshman Manuela Nicolini continued to showcase her skills, serving up 12 assists and landing a kill.

“I think we played well. Obviously we have a lot of things we are improving on and today was a good match for us to go in and try to focus on the things we’ve been practicing and improving on. We still have a while to go until we know where we want to be, but it was a good game today,” said Day on her team’s performance.

Fairfield was stellar on the defensive end too, limiting Iona to a dismal 0.19 hitting percentage. The Gaels (1-14, 0-3 MAAC) could not get anything going with Theiller, Mallory Bechtold ‘19 and Taylor Rudeen ‘19 leading the Stags with seven digs apiece.

Fisher, Garcia, O’Sullivan and Nicolini helped the Stags reach nine total blocks in total, which dampered any hope Iona had of trying to make it a game.

Fairfield’s head coach Todd Kress was happy with the victory, but continued to stress the importance of knowing that it is still early in the season. “We have a lot to do. We definitely have to continue to work on our defensive intensity and treating every point the same. So there’s still a lot of things we need to work on. It’s early; we are only four matches in, so we’re not even 25 percent in yet as far as conference play. We have a long way to go and lots of things to work on,” said Kress.

The Stags look to continue their winning ways as they visit the Marist Red Foxes on Wednesday in Poughkeepsie, N.Y. at 7 p.m. They will return to George Bisacca Court at Alumni Hall on Oct. 1 and 2 as Niagara and Canisius come to town for a weekend matchup. 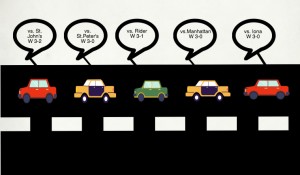