It’s easy to say that you’re anti-abortion. How could someone not be in support of the most mysteriously essential thing to our very existence? How could anyone be against life? Well, it’s much more complicated than that. In fact, being pro-abortion rights is a way of supporting life. Pro-abortion ideals support the general welfare and quality of human life which anti-abortion advocates try to create. Being pro-abortion rights is being pro-life and while the results are harder to see, they’re there. That’s why I support Planned Parenthood.

In February, Fairfield University College Democrats hosted the annual “Let’s Talk Sex” event. It is safe to say that reactions were mixed. Many were excited at the prospects of bringing comprehensive sexual safety to Fairfield, while others were upset with how the club sought to advocate for those needs. There were free condoms, donations collected on behalf of Planned Parenthood and yes, there were penis cookies.

Specifically, to those who were offended by the cookies, I encourage you to consider why any naturally occurring part of the body would be taboo. If we are candid with ourselves, quite a few of us are very familiar with such shapes. 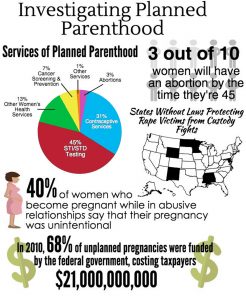 But, to those who were concerned with the presence of Planned Parenthood on campus, I ask you to consider the following:

Few, if any, have an enjoyable time when they visit Planned Parenthood. Why would they? The services they provide are sad necessities for so many. I support Planned Parenthood because it is a just effort to support the economically limited, the victims of sexual assault and those who simply are not ready to become parents. These are Americans, and they need you and me to support their lives. Being pro-abortion rights is an investment in American livelihood. Parenthood is a wonderful thing. Few, if any, will deny that. But if parenthood is unplanned, it can be dangerous. It can be dangerous to the child, to the parents and surprisingly, to taxpayers. Before we advocate for the rights of the unborn, we must first ensure the rights of the already-born. I will stand with Planned Parenthood as long as Planned Parenthood stands, because they exemplify the forceful belief in American equity, so professed by our school and our country. You should too.