The University of Maryland, Baltimore County Men’s Basketball team has flipped the sports world upside down. UMBC defeated heavily favored University of Virginia by an astounding 20 point margin in their 74-54 blowout, shocking the nation. Virginia, a 31-2 team, had coasted through what is arguably college basketball’s toughest conference this year. Their slow, defensive-minded style did not supply flashy highlight reels, but a remarkably successful regular season had inspired great hope and expectation for this National Collegiate Athletic Association tournament. On the other hand, unknown mid-major UMBC seized its first tournament birth because of their buzzer-beating conference championship win over the Vermont Catamounts. The UMBC Retrievers’ 25-11 regular season record included a whopping 83-39 loss to the Albany Great Danes. Realistically, nobody envisioned them playing competitively against Virginia. The Virginia Cavaliers were practically a guarantee to advance, if not to the Final Four, then at least to the round of 32. UMBC merely laid as a pebble on the path to a long-awaited championship. However, the month of March lived up to the madness.

The first 16 seed to ever win a tournament game did so in a very impressive manner. The UMBC Retrievers pounced out of halftime, quickly transforming a 21-21 deadlock into an absolute slaying of the Cavaliers. Senior Jairus Lyles delivered a magnificent offensive performance, finding the bottom of the net on seemingly every possession. He finished the game having shot a remarkable 9-11 from the field. Also, the outstanding leadership and poise of five-foot, eight inch, 140 lb point guard K.J. Maura ‘18 boosted UMBC on both sides of the ball. Virginia should have coasted in this opening matchup in order to defeat this UMBC team. Instead, UMBC orchestrated a clinic in the second half, cementing themselves into the history books with this incredible performance. 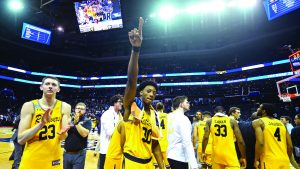 Aside from UMBC’s historic upset, this year’s tournament has been nothing short of complete madness. First, the seventh-seeded Nevada Wolf Pack somehow pulled off a miraculous comeback to knock off #2 Cincinnati. Then, the talented and athletic number seven seed Texas Agricultural & Mechanical Aggies stomped on defending champion North Carolina in dramatic fashion. Also, ninth-seeded Florida State edged out a victory against top-seed Xavier. Syracuse, the last team to punch their tournament ticket, snatched three victories already, despite their abysmal offense. Oh, and let’s not forget about 98-year-old team chaplin Sister Jean Dolores Schmidt, the overnight sensation and unofficial face of the #11 Loyola-Chicago Ramblers.

After the first two rounds left a hodgepodge of teams remaining, the Final Four is now set. Michigan pummeled Texas A&M in the Sweet Sixteen and escaped Florida State in the Elite Eight. The Wolverines have now ridden their impressive win streak from the regular season all the way to San Antonio, where the magical Loyola-Chicago squad awaits them. The Ramblers’ one point victory in the Sweet Sixteen was an absolute thriller, arguably the most enticing game of the tournament. However, Kansas’ Elite Eight victory over Duke did not exactly bore audiences to sleep either as this showdown required overtime to determine a winner. The Jayhawks will oppose fellow one-seed Villanova University in the Final Four, and Villanova, like Kansas, has demonstrated great discipline and maturity throughout the tournament. This star-studded matchup looks to be an instant classic.