Opening Day arrived with authority last Thursday, March 29 as all 30 baseball teams kicked off their season. The Mets opened their season in front of their home crowd in New York while the Yankees and Red Sox both started away from home. Even though it’s just the start to a long season, a team’s performance in April could determine if they will do well, or if it will be a lost year.

The Mets started off with a 9-4 victory on Opening Day against the St. Louis Cardinals. Noah Syndergaard struck out 10 batters over six innings while allowing six hits and four earned runs. Outfielder Yoenis Cespedes drove in three runs as shortstop Ahmed Rosario knocked in two more. Opening Day was a success for the New York Mets as they ended with a 36-21.

Jacob deGrom took the mound and retired seven batters via the strikeout as he dominated over 5.2 innings while allowing just one run. He picked up right where he left off in 2017 where he won 15 games and struck out 239 batters. Also, Cespedes and catcher Travis d’Arnaud hit their first home runs of 2018 as the Mets won 6-2.

Steven Matz and the Mets were looking for a complete sweep to start their 2018 campaign. The St. Louis Cardinals had other plans as they forced Matz to only pitch four innings. Yet, Matz never seemed in rhythm as he made frequent location mistakes throughout the game. The Mets’ bats went silent as they dropped the finale by a score of 5-1.

However, capturing two out of three games in a series is vital to establishing a good record for the postseason and the Mets did just that last weekend.

The Yankees kicked off their season in Toronto, Fla. where slugger Giancarlo Stanton would make his much anticipated Yankees debut. Only two pitches into his first Yankee at-bat, he smashed his first home run then hit his second long ball in his next at-bat. Luis Severino threw 5.2 impressive innings as he only allowed one hit while walking three batters, leading the Yankees to their first victory of 2018.

After starting the season 2-0, CC Sabathia took the ball against Toronto’s Marco Estrada. Both pitchers did not disappoint, but Yankee reliever Dellin Betances surrendered an eighth-inning home run to third baseman Yangervis Solarte. The Blue Jays thus captured their first win after some late game heroics with their bats.

To conclude the series, Blue Jay’s first baseman Justin Smoak single-handedly beat the Yankees on Sunday. In the bottom of the eighth inning, Smoak came up to bat with the bases loaded and delivered a grand slam, thus driving six runs in the game. Manager Aaron Boone made a questionable decision, loading the bases for Smoak, who had homered earlier in the game.

Furthermore, catcher Gary Sanchez struggled to start the season, posting a .071 average to start his 2018 campaign as reigning American League Rookie of the Year, Aaron Judge, is batting .200 to start the season. After late-game heroics by the Toronto Blue Jays, the Yankees started their season 2-2.

The Boston Red Sox started their 2018 campaign in St. Petersburg as they faced the Rays. The Red Sox led the Rays until the eighth inning where the Rays stormed back for six runs, defeating Boston 6-4 to spoil Opening Day for the Red Sox. Red Sox ace Chris Sale threw six spectacular, scoreless innings as he allowed just one hit but he got a no decision. Reliever Joe Kelly gave up four runs as well as three walks, which does not equal relief from the bullpen. Outfielder Denard Span tripled in three runs to put the Rays ahead for the rest of the game.

However, Boston would go on to to win four games in a row as a result due to solid starting pitching, where starters, including David Price, Rick Porcello, Hector Velasquez and Brian Johnson, allowed three runs or less in all four games. Shortstop Xander Bogaerts is off to a hot start, hitting a sizzling .455 over the first five games and looking to build off a disappointing 2017 season.

Opening Week serves as a stepping stone for teams to build momentum so they do not suffer a lost season for themselves and their fanbase. Since it is such a long season, fans can only get a glimpse of what is to come as baseball is a marathon, not a sprint. 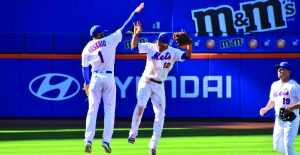