The Fairfield University Stags Men’s Basketball team entered the Metro Atlantic Athletic Conference Tournament on a four-game winning streak, which gave them immense momentum, looking to capture that first MAAC title since 1997. Underclassmen and juniors were looking to give the seniors, including Tyler Nelson, Jerome Segura and Jared Harper, a MAAC title to end out their season. Now was the time for the Stags to make a push.

Fairfield first won against Marist College, 71-57, in their first game in the MAAC tournament on Thursday, March 1. The Stags had the game under control as Nelson dropped 28 points and took three steals. Freshman Jesus Cruz also grabbed 13 rebounds in 31 minutes to lead the team. Junior Brian Parker lead the Red Foxes with 20 points in a losing effort. After this win, Fairfield moved on to play Niagara University.

Against one of the top seeds in the MAAC tournament, Fairfield came ready to play and they executed their game plan efficiently. They defeated Niagara 90-77 in their second contest of the tournament. Nelson once again led the team with 28 points, 10 rebounds and seven assists and Wassef Methnani ‘21 exploded with 15 points. Sophomore Ferron Flavors Jr. added 18 points which included four three-point field goals. Junior Dominic Robb for Niagara went off for 29 points and 12 rebounds as redshirt teammate Kahlil Dukes ‘18 scored 21 points. The Stags were feeling good and they wanted to keep their MAAC title journey going.

After defeating Niagara, Fairfield took on in-state rival Quinnipiac University in the MAAC tournament semifinals. The Bobcats took the court as the number seven seed as the Stags took the court as the number six seed. Fairfield led for almost the entire game as Flavors scored a team high 21 points and recorded 11 rebounds as well. Nelson added 19 points to compliment Flavors. The Stags missed only one free throw the entire game, going 21-22 from the line, which is a little over 95 percent. This fended off the Bobcats as the Stags clinched a MAAC championship berth with a 74-64 win over Quinnipiac.

This win earned the Stags a MAAC title berth which was their first appearance in the MAAC title game since 2012. They took the court against the number four seeded Iona College Gaels on March 6. This MAAC title game is what Nelson, Segura and Harper have been imagining during their four-year career. They wanted to capitalize on this opportunity and clinch a spot in the National Collegiate Athletic Association tournament.

Unfortunately, the Stags lost to the Gaels in the MAAC Championship, 81-73 as the Stags failed to capture that much-desired MAAC title. Nelson finished his Stags campaign in style by scoring 25 points while nailing six of eight from behind the arc. Three other Stags contributed double figures in points: Cruz, Flavors and Wassef Methnani ’21.

Junior Roland Griffin for Iona led all scoring by exploding for 29 points, eight rebounds and four blocks. He was the difference maker for the Gaels, helping them keep Fairfield off track. Senior Zach Lewis added 20 points, seven rebounds and four steals as he shot 50 percent from the field.

Head coach Sydney Johnson and Nelson shared an emotional moment with under 20 seconds left in the game as Johnson took out Nelson to let him get a standing ovation. The senior and the seventh-year head coach embraced on the sidelines as time was winding down. The emotion shown between these two ultimately displayed the quintessential relationship between a team leader like Nelson and a head coach like Johnson. The Stags look ahead to next fall without these seniors, most notably Nelson – Fairfield’s all-time leading scorer. 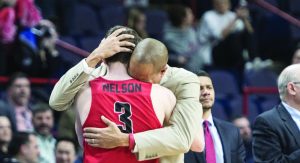 Contributed by For The Win/Twitter