Six different Stags scored on Friday’s contest against cross-town rival Sacred Heart as Fairfield cruised past the Pioneers with a final score of 7-1.

“It was well deserved. They worked for it and they believed in themselves and they were able to execute,” said head coach Jackie Kane following the conclusion of the game. 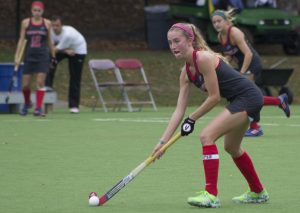 The Stags got off on the right foot to start the game, scoring two quick goals to give them the early advantage. Less than three minutes into the start of the game, the Stags struck first when Julie de Paeuw ‘17 found fellow midfielder Jaclyn Gallagher ‘18 open for the game’s first shot on goal and the game’s first goal.

Both teams would settle down for the remaining of the half until the Stags struck again; this time coming off the stick of Ann Burgoyne ‘17 for her 10th goal of the season, giving the Stags a 2-0 lead heading into the second half.

When asked about the early lead for the Stags, Kane said, “We had to set the tempo and score early. We didn’t want to let Sacred Heart in the game.”

The Stags picked up where they left off as they started the second half knocking down yet another goal, this time coming off an assist from Emma Clark ‘19 who found graduate student Hannah Pike for her sixth goal of the season, pushing the lead to three.

The Pioneers finally got themselves on the board when midfielder Rebecca Hauser knocked down a shot from the right circle, giving Sacred Heart their lone goal of the game with 30 minutes remaining.

Following the Pioneers’ goal, the Stags dominated the rest of the way, scoring four more goals and shutting out the road team for the rest of the game. Clark started the scoring spree as she was found open in front of the goal by Burgoyne and knocked the shot down, pushing the lead back up to three.

Almost 10 minutes after scoring the game’s third goal, Pike struck once again, converting on her second goal of the game off a beautifully executed pass from Corrine Persichetti ‘19, giving the Stags a 5-1 lead.

“She was determined to get that ball in the net and she just kept going until she did. Her first shot in the second half was killer; it was great,” said Kane of Pike’s performance.

Less than 10 minutes remaining in the game, the Stags would strike for two more goals. The first coming off Maddi Habert ‘19, who was assisted by Gallagher, and the second coming off a penalty corner that resulted in Shannon Doherty’s ‘20 first career goal as a Stag, sealing the victory 7-1.

“We’re pretty elated. This is a town rivalry, so we really wanted to come out and play well,” said Pike following the victory.

The win has allowed the Stags to improve their record to 3-1 in Metro Atlantic Athletic Conference play. However, they failed to knock down a goal this past Sunday against Monmouth, getting shutout 2-0. The Stags now stand at 3-2 in conference play, but look to carry the momentum to their last out of conference game hosting William & Mary from Virginia on Oct. 28 at University Field.

“We just need to take the positives of today like composed passing, real team feel behind this game into the next couple of games and hopefully we’re [going to] make it to the tournament,” said Pike of the remaining games on the schedule. 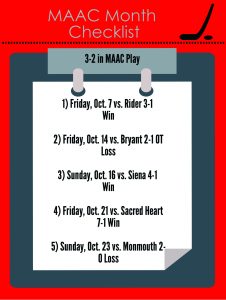