On March 18, ”The Devil of Hell’s Kitchen” returned in season two of Marvel’s “Daredevil” on Netflix. This season focuses on the balance Matt Murdock (Charlie Cox) faces between his life as a defense lawyer with his friends Foggy Nelson (Elden Henson) and 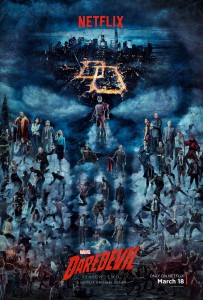 Karen Page (Deborah Ann Woll) and his actions as the Daredevil, a vigilante trying to clean up the streets of Hell’s Kitchen. As Murdock tries and ultimately fails to balance his two separate lives and neglects one for the other, Page takes the spotlight of trying to combat the problems within the city.

This season sees the introduction of the characters Elektra and the Punisher. The Punisher (John Bernthal) is a military vet who tries to clean up Hell’s Kitchen from the effects of different gangs, like the Mexican Cartel, the Kitchen Irish and the biker gang, the Dogs of Hell, after his wife and children were gunned down in a gang fight. Elektra (Élodie Yung), an old flame of Murdock, appears and tries to bring Matt deeper into his Daredevil life.

The main storyline of the season focuses on the Frank Castle, the alias of Punisher, and his actions in Hell’s Kitchen. This arc in the season is especially interesting because of his and Murdock’s goals: to clean up the city and make the criminals pay. Both are similar in ideology, but their means of accomplishing them are on opposite ends of the spectrum. Murdock wants to beat the sense or information out of people to try and stop crime while the Punisher wants to end gang violence permanently by killing gang members.

Elektra’s storyline comes in about a third of the way through the season and it kind of feels haphazardly pushed to the front as the season goes on. Her story starts with her trying to get intel on a Japanese gang, the Yakuza. It eventually changes to involve Stick (Scott Glenn), the mentor to both Murdock and Elektra, and my least favorite character introduced from the first season, in some conflict he is involved in. To me, Stick is the stereotypical stubborn master who wants his students to act according to his will. This brings down the quality of the show by adding an overused cliché.

Wilson Fisk (Vincent D’Onofrio) makes a reappearance in the plot, eventually taking on the moniker of “kingpin” in prison. Although Fisk lived up to the moniker of kingpin through his actions in the first season, this is the first occasion of him actually calling himself the Kingpin, his villainous alias in the comics.

The series prevails with its excellent cinematography, specifically in its fight scenes. This is best exemplified when these fights take place in small areas such as a narrow stairwell, between a number of bookshelves or a prison hallway. By rotating the cameras around the action sequences in a single camera shot, it allows the audience to view each angle of the fight rather than the same standard view of the fight viewers typically get when the camera remains stationary. The fight scenes involving Daredevil and Elektra fighting together are also choreographed well because of their similar fighting styles, since they received the same training from Stick.

The series also helps the audience sympathize with the character of Castle. The series runners make the audience feel the same way that Page feels about Castle. She knows that he is a mass murderer, yet she feels sympathy for him. She feels this way despite knowing that his reasoning behind his criminal behavior turns his crimes into crimes of passion. She finds herself in a predicament, advocating for a serial killer. This conflict of how to feel about the Punisher absorbs the attention of the audience.

Though the later introduction of Elektra’s storyline and the somewhat haphazard push it makes to the main plotline brings the season down, the second season of Marvel’s “Daredevil” was an enjoyable experience and I would recommend it to not only Marvel fans, but also fans of the crime drama genre.