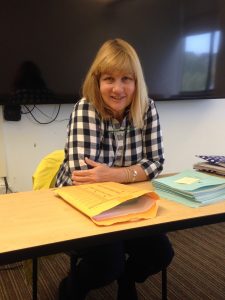 New Orleans. Nicknamed the “Big Easy.” Known for its round-the-clock nightlife, ongoing Mardi Gras celebrations, deliciously spicy food and for being the unchallenged center of jazz. It’s also where this week’s “Heard it through the GrapeVINE” spotlight, Dr. Patricia Behre, hails from.

Behre is a Yale alumna who works as an associate history professor at Fairfield. Her fields of specialty are in French early modern history, 16th century through 18th century general European history, Jewish-Christian relations and the history of skepticism. While she never learned an instrument for herself, her brother is a professional drummer and she grew up surrounded by music in the historic, lively city of New Orleans. “In New Orleans what we care about most is jazz and it’s just everywhere. You’re always going out to music, always hearing jazz.”

Behre’s musical selections are influenced by her life experience, seemingly infinite knowledge of history and her love for her hometown.

“One of the greatest jazz songs ever. I’ve heard it a million times and when I go to New Orleans every year for Thanksgiving, I go to Preservation Hall — the most famous place in New Orleans for hearing traditional jazz ‘Trad Jazz’ — and request it. It’s a really great, great song.”

“I like that one because it reminds me of my father, who has a very colorful, explosive, big personality. This song — it’s a song about someone with a big, explosive personality. If I go to Preservation Hall, this is the one I request. ‘St. James Infirmary Blues’ is played all the time — most people who know Trad Jazz know that song, but [this] is a little more obscure and that’s always fun.”

“The Single Petal of a Rose” – Duke Ellington

“While at Yale I took a course on Duke Ellington and we were studying this suite really intensely. Breaking it down, understanding it musically and studying the social circumstances it came out during. A historian, even at that age, I was more in touch with that aspect. Duke Ellington wrote [this] suite of music specifically for Queen Elizabeth II because he was going to be traveling to London to visit her. Going to England, away from the segregated South, meant finding a much more enthusiastic audience and gaining more freedom to travel … so Ellington wrote this suite of music for her and ‘The Single Petal of a Rose’ is one piece in that suite that is the most exquisite piece of music that I have ever heard … It’s this lovely, delicate, exquisite piece of Modern Jazz and it’s just spectacular and that’s a really favorite piece of music.”

“When I was a teenager I inherited all of my older brother’s records when he went off to college and he’s a Who fanatic. Actually, he’s a professional drummer and he’s wrote and has performed a one man show about the drummer of The Who, Keith Moon. He actually navigated with Pete Townsend for the right to play The Who music in that.”

“Across the Border” – Bruce Springsteen

“Both my husband and I were widowed in our first marriages and we both reconnected with this song during our [time as widows]. When we got married, we made it our wedding dance song because we thought it really captured this combination of having suffered some kind of loss and then having moved on from it with some sort of hopefulness.”

Check out Dr. Behre’s playlist on The Mirror’s Spotify.

Do you want to be featured in the GrapeVINE? Please email a list of 5-7 of your favorite songs and also a picture of yourself that we can use for the column to vine@fairfieldmirror.com