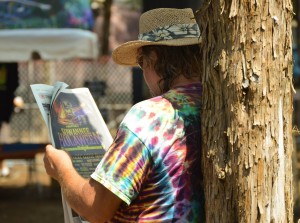 One of the attendees of Lockn’ Music Festival reads his paper. Andrew DaRosa/The Mirror

It’s difficult to summarize festival experiences, as they are multi-faceted and allure to the senses with grandeur and camaraderie. I am a firm believer that music festivals are the pinnacle of auditory and visual experiences, and this point couldn’t be more accurate than with the Lockn’ Music Festival in Arrington, Va.

Running from August 25-28, Lockn’ brings together over 30,000 music-loving fans to Oak Ridge Farm for a celebration of the art of jam bands and simplicity of life outside the technological landscape. Since 2013, the relatively modern festival has already boasted a diverse assortment of musicians, ranging from Tom Petty and The Heartbreakers and the Allman Brothers Band to Furthur and the String Cheese Incident.

However, Lockn’ exhibited the strongest lineup in the festival’s brief history this year, which included the likes of Phish, My Morning Jacket, Circles Around the Sun and Gary Clark Jr. Couple the lineup with the vast array of interactive charity exhibitions and colorful head shops, and you have an acid-soaked hippie dream.

Day One played out as a preview of the festivities with music not starting until 7 p.m., allowing all campers, including myself, time to meet their neighbors and set up their temporary home for the next four nights. Vulfpeck, one of the most vivacious up-and-coming jam bands on the market, kicked the night off with an otherworldly set that gave the audience a taste of their funk rock brand that would return again the following day.

Umphrey’s McGee followed almost immediately due to the new rotating stage implemented this year. To call their set pure fire would be an understatement as they ripped through their hour and half set, which featured a rendition of their classic “2 x 2” segued into a masterfully executed “Speak Up,” which debuted last December. Notably, Gene Ween joined the stage to ignite the “God Boner” collaboration with an unexpected cover of Billy Joel’s “The Stranger,” generating equal parts laughs and applause from the audience.

Minutes later, Gene Wene came back onto the stage with his endearing brainchild, Ween. The group, known for their profane and comical satirization of commonalities, brought just the right amount of energy to their headlining performance but alas, campers left in clumps after a long day of travel, which worked against the flow of energy being supplied to the group.

Friday was a day bathed in treasure as the schedule consisted of triumphant returns and explosive premieres. Both Ween and Vulfpeck played repeat sets with greater energy than that of the day before, especially Ween. Dean and Gene Ween bursted out a fan-serviced set with enough highlights to make any fan paint the town brown, especially “Roses are Free” and “Buckingham Green.”

White Denim made their Lockn’ debut in an indie-tinged 13-song set that even included a cover of Roxy Music’s “2HB.” Much ado is also to be made of Charles Bradley & His Extraordinaires, who played under two outfits in their mid-afternoon set. Bradley, aged 67, belts harmonies better than most singers half his age and still manages to command the stage without staggering or losing pitch. 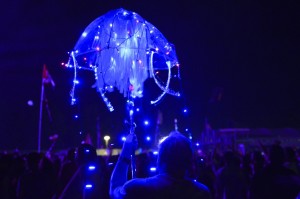 A shot from the crowd during Phish’s performance. Andrew DaRosa/The Mirror

The kings of the evening though were the seminal jam band, Phish, who surprisingly have not graced the Lockn’ stage until this year. The band that drew me to the festival in the first place unloaded a hit heavy first set that begun with a “Wilson” that meandered, but found composure as the song concluded. “Down with Disease” fell a bit as bassist Mike Gordon tackled with some technical errors, but that didn’t stop the Vermont Quartet from playing a great first set, which was capped off by an a cappella cover of David Bowie’s “Space Oddity.”

The second set proved why Phish is so revered in the jam band community as the group started off with “Punch You In The Eye,” which was only the second time the group played the number this year and included snippets of “The Landlady” throughout the piece. The set reached ultimate transcendence as lead guitarist and singer Trey Anastasio lead the group through the triad of “Ghost,” “Bathtub Gin” and “Backwards Down The Number Line,” all of which segued into a 40-minute improvisational extravaganza. To cap off the night, the group launched into the revered “You Enjoy Myself,” complete with trampolines and falsettos.

However, the best day of music came Saturday as the night was capped off by the three most anticipated performers of the festival, Tedeschi Trucks Band, Phil Lesh (of the Grateful Dead) & Friends and My Morning Jacket.

The afternoon proved pleasant as Twiddle and Galactic soaked up the 102-degree heat with funk-jazz improvisations that kept the crankiness at bay for a few hours of time. However, Moon Taxi highlighted the afternoon as they deviated from the typical jam rock sounds that surrounded them by infusing elements of indie rock that worked to their advantage, especially on “All Day All Night.”

After a much needed mini-nap, I returned to the field in time to catch Phil Lesh & Friends, with guests Jon Fishman and Page McConnell of Phish, Joe Russo, Anders Osborne, and the Infamous Stringdusters. The group channeled the bluegrass sounds of the early 70’s Dead, but faded into psychedelic majesty with their run of “Shakedown Street” and “Terrapin Station” that closed out the performance, which almost didn’t occur as Lesh ran late due to a delayed plane. 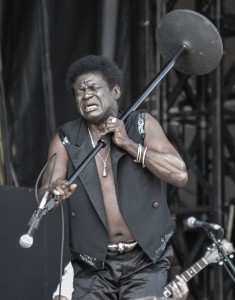 I still hold onto the fact that the Tedeschi Trucks Band, comprised of bandleaders Derek Trucks and Susan Tedeschi, held the coveted spot of set of the weekend. The yearly festival staple brought fire to the stage with a variety of covers that ranged from George Jones to Miles Davis and left the audience with mouths agape as their two-hour set passed too quickly.

The wildcard of the event, My Morning Jacket, surprised all naysayers that casted out their performance as a jam band replacement. Jim James and company, whom I’ve caught numerous times, played a riveting show that included staples like the relentless “Steam Engine” and the mysterious “Touch Me I’m Going to Scream Pt. 2.” What shocked many MMJ fans was the amount of covers that the group premiered, including “Rebel Rebel” from David Bowie and Burt Bacharach’s “What the World Needs Now Is Love.”

As the tears flowed and the campsites went down, Sunday provided the bittersweet ending to an otherworldly festival. The day was headlined again by Phish though unfortunately, I had to miss my favorite jam band since my caravan needed to make some time up that night back to Massachusetts.

What I did manage to catch was a positively charming celebration of life brought to us by Keller Williams’ Grateful Gospel and some improvisational funk rock from the Chris Robinson Brotherhood. However, I did manage to convince my entourage to stay during the second Phil Lesh & Friends set of the weekend, which included CRB and Gary Clark Jr. Lesh bass-bombed his way through the mid-70’s Dead catalogue to much appraise, but fell short of the magic that occurred on stage the night before.
I simply cannot include every miniscule detail that entailed my festival experience, but I can say this: Lockn’ is no ordinary festival and evoked a sense of mysticism that will surely draw fans to their little jam band Mecca in Virginia for years to come.