This week’s “Heard it through the GrapeVINE” is Gianna Ricchezza ‘19. Despite devoting most of her time to the rigorous course load that accompanies Fairfield’s nursing program, Ricchezza finds time to balance her schoolwork with her passion for music. As 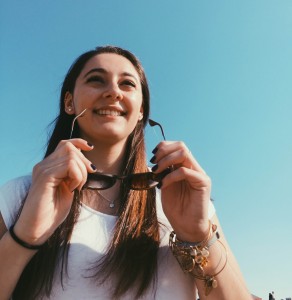 a singer for both Glee Club and a vocalist for the all female A Capella group, Sweet Harmony, Ricchezza is able to continue following her love of music that she discovered at a young age.

“Music is such a big part of me and I couldn’t imagine living my life without it,” she said. “I remember listening to music as a little kid in the car with my mom, whether it was Kidz-Bop or the cheap little CD you would get from the McDonald’s drive-thru, my mom would sing to me in the car and I would learn the words and sing with her.”

As both an avid listener to pop-music and as well as an actress who has had experience with performing and singing to showtunes, Ricchezza claims that she doesn’t classify her favorite music styles by genre, but rather by artist.

“I love Ingrid Michaelson and Sara Bareilles; I am most attracted to their music because their lyrics are so powerful and I can often find myself relating to what they write,” Ricchezza explained. “I also love show tunes — I’ve been involved in theatre ever since I was in the second grade and listen to songs from shows ranging from “The Phantom of The Opera” to “Something Rotten.” Oftentimes, I find myself listening to overtures from shows and getting chills up my spine because I truly appreciate the incredible talent and creativity that composers and directors have.

“I just discovered this song via one of my close friends from home. I became hooked right off the bat; the upbeat rhythm just makes me want to get up and dance.”

“This song has been a favorite of mine for a while, it makes me think of driving my car down the shore with my windows down and blasting it.”

“Everything Changes” by Sara Bareilles

“I have been obsessed with this song since it came out; Sara [Bareilles] wrote music for a musical that just opened on Broadway and this is one of the songs from it. It really tells a story and it is really mellow so it’s nice to listen to.”

“This is a happy go-lucky song that has a good beat and lyrics that make you want to live like there’s no tomorrow.”

“I often listen to this song when I need to feel calm or at peace. It has a quiet melody and it is a very tranquil song, plus it is sung by my two favorite artists, so what could be better?”

“Sound of a Broken Heart” by Jukebox the Ghost

“I discovered this band when I went to see Ingrid Michaelson in concert, they were her opening act. This is another upbeat song that has a really catchy tune.”

“This is my go-to song for beach music. I am a Jersey Girl and I spend my entire summer down the shore. This song is pretty much on repeat for me all summer.”

Do you want to be featured in this section? Please email a list of 5-7 songs that tickle your fancy and also a picture that we can use for the column to vine@fairfieldmirror.com.