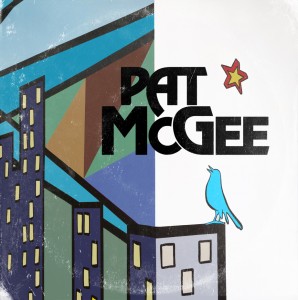 Pat McGee is a passionate singer/songwriter that is able to bring his music full circle with simple melodies and sentimental lyrics that tug on the heartstrings with wholesome rock energy.  With nearly two decades of recording and touring large festivals and universities as a college band, McGee remains humble and dedicated to his craft. McGee will return to Fairfield Theatre Company’s StageOne for the official CD release party of his new album on Saturday, March 21 at 7:00 p.m.

McGee’s tenth self-titled album arches over country, rock and bluegrass genres and incorporates “the sounds I grew up listening to,” said McGee. The 13-track record will be available at StageOne, although the record will not officially be released until the following week. Pre-order vinyl will also be available at the performance, paying tribute to the excitement McGee had when he first discovered vinyl and ran off to the record store.

“When I was in high school, classic rock was what you listened to. Everything really started with James Taylor, The Beatles, Eric Clapton, Eagles and late 70’s music,” said McGee. “I am the youngest in the family and my brother played guitar. I am thankful that they turned me onto this stuff,” added McGee.

The opening track, “Bad Idea,” is the perfect fix for any country die-hard with driving blues electric guitar, solid drums and the right amount of twang on Pevar and Wachtel’s guitar solos. Lyrically, McGee sings about “a person who is their own worst enemy…or might be in a situation that they can’t seem to get out of,” wrote McGee.

Goosebumps take form as “Overboard” swells into a gritty ballad featuring Pat Monahan, better know as the lead singer of Train. A gigantic shimmer resonates over the band every time the drummer hits the sizzle-cymbal behind his ‘59 ludwig. The band soars while McGee and Monahan sing “Take my hand, take my hand,” a sentimental autobiography about going overboard for the ones you love.

Latter songs such as “Kite String” stray away from the albums midsection ballads and lovebird sentiment of “Caroline” and “When Did Everything Go Wrong” and delve into Americana-funk fusion.

The albums eleventh track, “Rhode Island” is beautiful with rock ‘n’ roll force. McGee sings of a fictional character, Quinn, who mirrors McGees’ longing of home, especially after decades on the road.

The Virginia native released his debut self-produced album, “From the Wood,” in 1997 which remains a true testament to McGee’s down to earth vocals and relatable lyrics. Songs such as “Rebecca” and “Haven’t Seen For A While” remain crowd favorites.

After McGee signed with Warner Brothers, “Shine” was born in 2000 featuring Rock and Roll Hall of Fame member Jerry Harrison of The Talking Heads and former guitarist of The Allman Brothers and Gov’t Mule’s front man Warren Haynes.

In 2004 McGee released “Save Me,” which melds McGee’s catchy lyrics with an alternative edge. The record features memorable tracks such as the hit single, “Beautiful Ways.” “Don’t Give Up” was also featured as the Olympic theme song for NBC. McGee would continue to produce top-shelf live and studio albums including, “These Days” (2007), who pays tribute Chris, the bands drummer, who passed suddenly.

“No Wrong Way To Make It Right” (2011) blends McGees ‘heaviest and most delicate moments’ with the music McGee grew up listening to. “Juliet” is a song on the 2011 album about McGees’ strong daughter. Although she was 5 at the time, the song was written from the future mindset of a lovestruck 15-year-old attempting to sweep McGees’ little girl off her feet.