Defending a championship is always a tough task for any team. The defending Metro Atlantic Athletic Conference Field Hockey Champions came out the gate struggling to pick up a victory  as they started with a 1-10 record in out-of-conference play, picking up its lone win against St. Louis back on Sept. 3. When asked about the start to the season, head coach Jackie Kane stated, “The biggest challenges we have had is pulling everything together and having a strong defensive effort and strong offensive effort in the same game.”

Now with the beginning of MAAC play, the Stags have a fresh start and an opportunity to reach the top of the conference. For the Stags first conference game, they hosted Rider on Oct. 7 at University Field and picked up their first conference win with a final score of 3-1. Senior goalkeeper Caitlin Bennett provided a huge boost for the team as she finished the game with a total of 14 saves, while Captain Ann Burgoyne ‘17 knocked down two of the team’s three goals on the game.

“[The win was] huge. It has propelled us forward,” said Kane of the team’s first MAAC win.

Although the following game was not part of conference play, the Stags were able to come out victorious for their second consecutive win when they hosted the Villanova Wildcats. Senior Julie de Paeuw scored two goals in less than 10 minutes in the second half of play, also providing an assist. Sophomore Emma Clark and Jamie Appelberg ‘18 each added a goal, giving the Stags a 4-1 victory. Once again, Bennett proved to be pivotal as she finished the contest with seven goals.

Following the Stags victorious weekend, Bennett was recognized for her total of 21 saves against both Rider and Villanova, as she was named MAAC Defensive Player of the Week. Now with this award, it marks two consecutive weeks that a Stag won the defensive player of the week award, as Caitlin Gilligan ‘19 previously won the award. 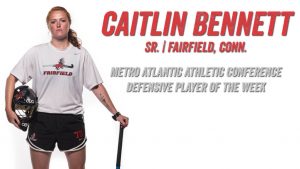 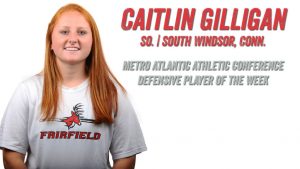 “Goalies have to make the saves that they’re supposed to make, but what both Caitlins have done is that they’re making the saves to win the game for us. Their effort obviously turned it into a victory for us,” said Kane of having back-to-back defensive players of the week.

Bennett is not letting the award get to her head as she said, “It doesn’t mean that much because there’s a new one every week. It’s more about the rest of the team doing the scoring; it’s really a team effort.”

The Stags’ two-game winning streak would come to an end at the hands of conference foe Bryant in overtime with a final score of 2-1. However, Fairfield would bounce back the next game when they traveled to take on Siena and came out victorious behind a two-goal effort by defender Erin Buckley ‘18 edging the Saints 4-1.

“I play defense, so it’s nice when I get to go up on the circle and score,” said Buckley.

“We’re feeling pretty good, 2-1 is a good place to be and our wins were good solid wins and our one loss was close. So we’re pretty confident going into these next games,” said Bennett of the vibe from the locker room.

Now with a few conference wins under their belts, the Stags look to carry the momentum when they host cross-town rival Sacred Heart on Oct. 21.