It is conventional wisdom that all good things must come to an end. However, in this case, the end seems nowhere in sight. It was just another day at the office for the Stags on Oct. 30 as they dominated the winless Saint Peter’s Peacocks in straight sets en route to capturing their 16th Metro Atlantic Athletic Conference Championship in program history. The 25-9, 25-13 and 25-11 thumping gave Fairfield their 16th straight win, putting them at 22-5 overall and 15-0 in conference play.

As was the case at their first meeting in Jersey City, N.J. on Sept. 17, the Stags took control from the outset and never allowed the Peacocks to come close in any of the three sets. It was a balanced offensive attack and relentless defensive effort that enabled Fairfield to command their side of the court, much to the pleasure of head coach Todd Kress. 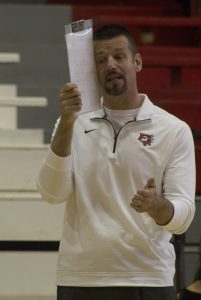 “We took care of our side today. We did not want to focus too much on what was going on, on their side,” Kress said. “We wanted to be better defensively and work on our transition resets today and we really did those things out there.”

The first set saw the Stags tally 14 kills with only three errors on a solid 39.3 percent conversion rate on the attack. Fairfield limited Saint Peter’s to four kills while they accumulated nine errors on the offensive. The size of the Stags front line either blocked or altered many of the Peacocks’ kill opportunities. As she has done all season, Megan O’Sullivan ‘17 led the charge at the net with her outstanding presence up front as she totaled seven blocks.

“We all came in knowing a conference championship was on the line, so we just wanted to go and make it happen,” O’Sullivan said. “Everybody stepped it up and played their best at a fast speed today.”

“Fast” was the theme of the day as the second set provided another sample of what the Stags can do when they begin the match with a hot start. Again they posted 14 kills to only three errors while compiling a 40.7 hitting percentage. The momentum from the second set carried over into the third frame as Fairfield played their most efficient offensive set of the match, sending home 11 kills with only one error to give them an astounding 52.6 hitting percentage.

The Stags had four different players notch five or more kills during the game as they finished the afternoon with 39 putaways. Junior Megan Theiller led the bunch with 11 kills while O’Sullivan, Sonja Radulovic ‘20 and Skyler Day ‘18 chipped in eight, seven and five kills, respectively.

Fairfield looks to remain undefeated in the conference and pad the winning streak when they head up to Buffalo this weekend to take on conference foes Canisius and Niagara. For O’Sullivan, the weathered senior knows that the team cannot look past anyone in the quest to repeat as MAAC Championships come middle of November.

“Everyone knows the streak is good, the coaches tell us that,” O’Sullivan said. “But we think of every game as an opportunity to get better.”

If the Stags can get any better than how they are playing right now, the whole nation should be worried about this juggernaut. 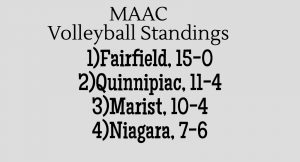