It seems that the Fairfield University men’s basketball team has found their groove after picking up their third consecutive conference win over the Siena Saints on Monday, Feb. 5 by a final score of 78-65. The Stags have averaged 88 points per game during their last five games and with their third straight win, the Stags improve their record to 10-13 and 5-7 in Metro Atlantic Athletic Conference play.

Fairfield came out of the gate firing, scoring the game’s first six points on three consecutive layups off the hands of Ferron Flavors Jr. ‘21, Tyler Nelson ‘18 and Jonathan Kasibabu ‘19 in just the first five minutes of the game. Siena’s Kevin Degnan would stop the Stag’s run after connecting on a layup to give the Saints their first points of the game. 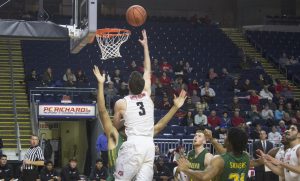 Coming into the game, Fairfield’s offense has been on fire, shooting for a high percentage and Siena looked to slow down the Stags’ offense in the first half of basketball by playing tight and conservative defense. Although the Saints made things difficult for the Stags’ offense, there was one player that Siena seemed to have trouble containing and that was the MAAC Player of the Week, Nelson. The senior would lead the Stags through Siena’s defense to score 12 points in the first half to lead all scorers through the first frame of play. Fairfield would close out the half on top by just three after Jesus Cruz ‘21 converted on a layup to beat the buzzer to give the Stags a 33-30 edge heading into the half.

Fairfield looked to build their lead to start the second half of play and they did just that with the help of Flavors Jr. as he drained a three-pointer on two of the Stags’ first three possessions in the half. The three-pointers converted by Flavors Jr. would increase the Stags’ lead up to nine as they held a 41-32 advantage just two minutes into the half.

The Saints would answer back with a run of their own to cut the deficit down to just five, but a dunk from Wassef Methnani ‘21 and another shot from three-point land from Flavors Jr., who finished with 16 points, would increase the Stags’ lead to double digits at 48-38 with just under 15 minutes remaining in the quarter. “The more guys contribute the better off we’ll be in the long run especially come tournament time, with the last two or three weeks of the regular season,” said Nelson of the production of the freshmen. 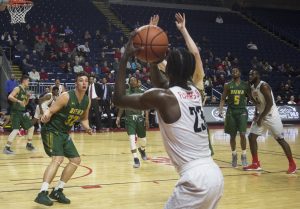 The Stags never trailed in the game and would not relinquish their lead for the remainder of the game, increasing their lead as high as 15 points with less than a minute left. The Stags would close out the game with a 13-point advantage, picking up the 78-65 victory over conference foe Siena for their third straight victory.

Nelson finished with a game high 27 points to lead all scorers and moved to second place on Fairfield’s all time scoring list with a total of 1,941 career points surpassing Joe DeSantis’ ‘79 total of 1,916. Nelson is just 65 points shy of surpassing Tony George’s ‘86 total of 2,006 to become the all-time leading scorer in Fairfield history.

“It’s a huge momentum builder for us, obviously when you beat three teams your confidence is really high. Now we have a couple of days to prepare and then we head to Buffalo and have two huge games against two really top MAAC teams, so we’re looking forward to it,” said Nelson as the Stags look to carry the momentum. The Stags will travel up north for a pair of conference matchups starting on Saturday, Feb. 10 against Niagara University and concluding on Monday, Feb. 12 as they conclude the road trip against Canisius with the hopes of improving their conference records.