The Stags hosted the Purple Knights of the University of Bridgeport on Nov. 4 for their annual exhibition game, where the Stags came out victorious with a dominant 91-59 win. Fairfield displayed its dominance on offense, connecting on 14 shots from three-point land, finishing the game shooting over 60 percent from the charity line while assisting on 21 of the 29 made field goals.

The Stags jumped out to an early advantage in the game’s first minutes, going on a 9-0 run that set the tone early. However, the Purple Knights would not go down easily, as they went on a run of their own, cutting the lead down to one after scoring eight points. Just two minutes after cutting the lead down, Bridgeport faced a 17-10 deficit, but would go on a 10-0 run to take the 22-17 lead with less than 10 minutes remaining in the first half of play.

Fairfield would answer back in the final minutes of the half scoring 18 points, compared to Bridgeport’s eight, taking the advantage as the Stags went into the half with a slim 35-30 lead. For the Stags, Tyler Nelson ‘18 led the way in scoring with a total of 14 points while Curtis Cobb ‘19 added six points, nine rebounds and five assists in his first 19 minutes of the game.

“I think we really came out and played the way we wanted to play,” said Nelson when asked about his team’s start to the game. “We dictated the tempo of the game, translating to easy buckets.”

Having just a five-point lead, head coach Sydney Johnson shared a message with his team as they headed out for the second half of play.

The Stags would continue from where they left off, pushing their lead up to 10 to start the second half. Nelson would connect on his third three-pointer of the game with a little over 15 minutes left in the game to start a 13-3 run for the Stags, giving them a 17-point advantage with a score of 52-35 with just 13 minutes to go in the game.

“We were able to get a few stops, which then allowed us to get some momentum and get out in transition. That’s always tough to deal with,” said Johnson.

Fairfield would continue to dominate the road team, shooting 61.3 percent from the field for the rest of the game, while knocking down eight threes in the half. Having less than eight minutes remaining in the game, the Stags would push their lead to 20 and never looked back as they went on to win by a final score of 91-59. 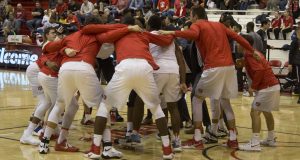 The Fairfield University Men’s Basketball team looks to climb to the top of the MAAC this season.
Alfredo Torres/The Mirror

Nelson led all scorers with a total of 28 points, knocking down six from beyond the arc. When asked about Nelson’s play, Johnson said, “He certainly has the skill level to play a lot of minutes, but I want to challenge him to help us win and that’s what he does. He can shoot the ball — we all know that. He’s good at rim, but I think his leadership going to another level is going to make this a winning program.”

“They’re coming along. I think they have great leadership in front of them with [Amadou Sidibe], [Tyler Nelson] and [Jerome Segura]. Those two sophomores are able to blossom and come along at a good pace, so it’s nice to see their contributions,” said Johnson on the play of his sophomore guards.

Although it was just an exhibition game, the Stags displayed a dominant performance.

“It’s really great for our confidence, coming out here and getting a good 30 plus point win like that, just getting ready for the first game,” said Nelson after the win.

The Stags will be on the court on Nov. 11 for their season opener as they welcome cross-town rival Sacred Heart for a battle for Connecticut.