Fairfield’s field hockey team dropped another nail biter on Oct. 2 when the Providence College Friars edged the Stags 3-2. The Stags have now dropped their seventh consecutive game and second consecutive one point loss pushing their record to a lowly 1-10.

When asked about the game, head coach Jackie Kane said, “The game could have gone either way; we made some adjustments hoping that would be what we needed to get our win, but we just made some crucial mistakes at times.”

The Stags started the game on the right foot as they scored the game’s first goal 13 minutes into the start of the game. Sophomore Kaley McMullen scored her third goal of the season off a penalty corner. McMullen threw the ball into play, finding Jaclyn Gallagher ‘18 who sent a shot that connected with the stick of McMullen for an early 1-0 lead.

Eight minutes after Fairfield scored, the Friars would answer with a goal of their own, tying the game at one. Both teams would remain tied at one as the first half came to an end.

The Friars would jump out on top to start the second half with their second goal of the game to take a 2-1 lead when Megan Hamilton found teammate Sylvia Miller in the center of the circle.

Just as the Stags have done all season, they battled back and responded with a goal of their own just four minutes after Providence took the lead. Senior Julie de Paeuw passed the ball from the left corner to the center of the box where graduate student Hannah Pike found the ball and shot it past Providence’s goalkeeper to tie the game 2-2.

“Hannah had set a goal for herself to shoot from the top of the circle and she scored and that was great,” said Kane. 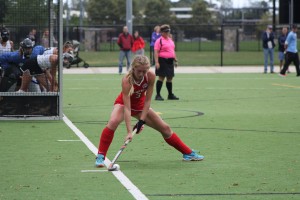 Graduate student Hannah Pike finished the game with a goal, her third of the season.
Alfredo Torres/The Mirror

Only Pike and McMullen ‘19 knocked down goals for Fairfield in the contest against the Friars.

When asked about her team’s goals, Kane said, “They were doing their jobs, that’s their jobs. And if they are on the forward line they are supposed to score and they did their job.”

The rest of the half would see both teams battling to knock down the potential game-winning goal. Having less than 10 minutes remaining in the game, the Friars would do just that as they knocked the game’s final goal to seal a 3-2 win for Providence.

For the Stags, Caitlin Gilligan ‘19 made her first career start and finished the game with a career high 10 saves. Kane, who had some words to share about Gilligan’s performance, said, “That was her first career start; it’s difficult to step in, but she rocked it.” Kane added, “Her multi saves is what impressed me the most. She had the opportunity to save more than one shot and she did really well; I’m really proud of her.”

The Stags will be back in Metro Atlantic Athletic Conference play for the first time this season when they host Rider on Oct. 7. When asked about what needs to be done for the Stags to bounce back, Kane said, “We have to find the belief and attitude that we can win this game because we can. We’ve had a really difficult non-conference schedule; I certainly did not expect to be 1-10. I think the girls are feeling a little defeated, but they need to pull each other out and get ready for Rider. I’m glad we’re at home for our first MAAC game.”