The Fairfield University Women’s Lacrosse Team picked up their second consecutive victory on Sunday, March 5 as they topped the University of New Hampshire Wildcats 10-5. Five different players scored for the Stags while goalkeeper Caleigh O’Connor ‘17 recorded a career-high 10 saves en route to a team win. 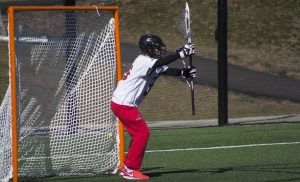 O’Connor recorded her second win of the season after fending off 10 Wildcat shots, while picking up five ground balls and forcing two turnovers.

“She had 10 saves, six in the first half. I thought she played the most complete game that she’s played all year, she got the ball out well on clears, she was confident, she had some great point blank saves. We needed that from here and she knows that, so that was nice to see,” said head coach Laura Field on the play of her goalkeeper.

Fairfield’s offense was led by Brooke Gallagher ‘18 who netted a hat trick, recording her first multi-goal game of the season and of her career. Gallagher wasn’t the only Stag to record multiple goals as Riley Hellstein ‘17, Alex Fehmel ‘17 and Lily Crager ‘19 all added two points for Fairfield. Sophomore Scarlett Sulliman also registered a goal for the Stags.

“That is what’s going to make us a good team,” said Field on the team’s balanced offense.

“[Hellstein] had seven goals last game so obviously people are keying up on her and we’re able to spread the ball. She’s a smart attacker, she knows how to distribute the ball, she’s one of the most unselfish players that we’ve ever had. A lot of other people’s goals are indicative of her being smart enough to share the ball,” added Field on the playmaking from Hellstein.

It was all Fairfield to start the game as they scored the game’s first four goals, two of which came off the stick of Crager. With 11:42 remaining in the first half of play, New Hampshire recorded its first goal of the game, but it would be their lone one for the remainder of the half.  The Stags would go on to score two more goals coming off Gallagher and Fehmel, giving them the 6-1 advantage at the half.

The Stags would register another goal to start the second half to give them a 7-1 advantage. New Hampshire would attempt a comeback as they got back-to-back goals from Devan Miller ‘19, who also registered a hat trick in the game. Fairfield would strike right back with two goals of their own to give them the 9-3 edge as Gallagher and Fehmel were able to get the ball through the net.

Both teams would go on to trade more goals but eventually Fairfield was able to hold off the Wildcats to pick up their second consecutive win over New Hampshire 10-5. Fairfield will look to carry the momentum when they travel to take on Boston University on Wednesday, March 15 for a 3 p.m. faceoff against the Terriers. 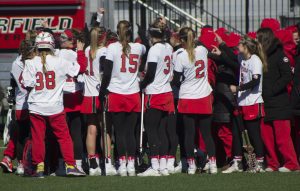 For the second straight weekend the Stags captured a dominant victory in front of the home crowd at Rafferty Stadium. Fairfield has scored 29 goals over the last two games while only allowing opponents 19 goals in the span. Alfredo Torres/The Mirror