There are few things in sports more exciting than a comeback. This past week, Fairfield’s volleyball team delivered a thrilling comeback win over Saint John’s University.

Fairfield entered the match at 6­-5 on the year, having lost two of their previous three matches. Not only was Fairfield able to get back into the win column, but they did in exciting fashion, winning three straight sets after being down 2-­0.

The first set was a competitive one. The teams fired back and forth until Fairfield built a 14­-11 lead, forcing a St. John’s timeout. The timeout gave St. John’s a chance to refocus their attack as they worked their way back, taking the set 25­-22. The set included three lead changes and nine ties.

The second set was the lowest point in the game for the Stags. St. John’s came out firing and took the set by a margin of 25-­16. Fairfield would scrape within a few points, but St. John’s was able to maintain a healthy lead throughout the entire set. Fairfield head coach Todd Kress saw sloppy play as the biggest vice for the team in the first two sets. “We gaffed about three free balls [in the second set], but we were still doing some OK things. We just weren’t taking advantage of the opportunities we were given,” said Kress post match.

The third and fourth sets played out like mirrors of the first two. However, the third was incredibly tight and Fairfield was able to minimize errors, cutting down from 10 in the first set to just five in the third. After St. John’s pulled to 20­-16, Megan Theiller ‘18 and Kaitlyn Fisher ‘19 would finish off the St. John’s rally.

Each of them providing two kills in the fourth set’s final moments to win it 25-­20. The Stags continued to pour on the heat in the fourth set. St. John’s, who had played mostly mistake free in the first two sets, began to fall apart, at one point committing three attack errors in a row. Fairfield took the set without much difficulty, winning 25­-15.

The final set was the most intense and competitive. The set stayed tight until Fairfield pulled ahead to a slight 12­-9 lead, forcing the Red 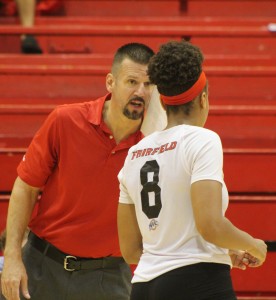 After being down two sets, head coach Todd Kress pushed his team to battle back.
Alfredo Torres/The Mirror

Fisher and Megan O’Sullivan ‘17 would each provide a quick kill to end the St. John’s rally and complete the comeback for Fairfield.

Postgame, Kress cited the performances of Fisher and Sydney Williams ‘19 as significant individual efforts in the win. “We suffered a significant injury against Villanova this past weekend. [Williams] stepped up big in the middle to help solidify us. [Fisher] on the right side did a great job. Those two I thought did a tremendous job tonight,” said Kress.

The win has had a rallying effect for the team. After beating St. John’s, the team managed a pair of excellent outings on the road against conference rivals Rider University and St. Peter’s University, winning 3­-1 and 3-­0, respectively. Their next match is Saturday, Sept. 24 at home against Manhattan College. 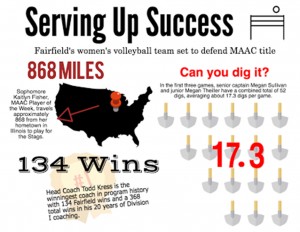