Immediately after the conclusion of the baseball season last summer, Fairfield began the process of renovating the bleachers and clubhouses for the Alumni Diamond baseball field. Even though they did not renovate the field itself, it is an upgrade from what fans and players previously experienced. Fairfield planned the renovation for three years and all of the funding for the overhaul came at the right time as the Stags are coming off a Metro Atlantic Athletic Conference Championship.

Fans are excited about the bleacher restoration since they will now feel as though they are at a professional baseball game.

“Just the facility and the stadium is probably the best facility in the MAAC,” said head coach Bill Currier. He believed that the new facilities can help prospective players decide on playing at Fairfield as opposed to other schools. “With this type of education, we want to complete that circle of a great place for a kid to come to school and play baseball, not just a place to go to school,” said Currier.

“The locker rooms are even more personable because the players are there before practice, after practice and that’s where the team bonding grows. You need to have that,” Currier added. 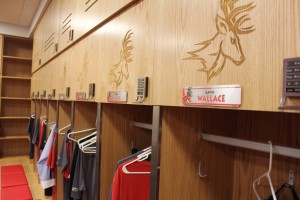 When the University proceeded to renovate the baseball field, the general consensus was that the improvement was much needed. These improvements to the bleachers will please fans as the athletic director aimed to make the stadium more fan-friendly and enjoyable.

“The minute the stands were taken down, there was a 100 percent improvement on the facility,” said athletic director Eugene Doris, who is now entering his 23rd year at the helm.

“I think the program is headed in the right direction and I think when a kid comes in, sees the facilities and sees what kind of education you’re going to get, you have the triple-header to get it done,” Doris added.

Members of the Fairfield baseball team also agreed that more fans will come out and support Fairfield with the updated fan section. “These new bleachers will get people to come back out and support the team, which will be very nice,” said relief pitcher Mike Bonaiuto ‘18.

Given all of the improvements for Fairfield’s baseball team, everyone including alumni and students have something to be excited about this upcoming spring. The Stags revealed their new digs this morning when they hosted Scout Day, but will officially start the season on March 21 as St. John’s comes into town for Fairfield’s first home game.