To this point in the season, the men’s soccer squad has been defined by inconsistency. After a massive 2-1 season opening win against Pac-12 power Oregon State, the Stags were held scoreless for two straight games, dropping contests to Portland and Army, 0-6 and 0-3, respectively. After two blowouts, the red and white developed a flair for the dramatic as they played two straight overtime games, a 2-1 triumph over Lafayette followed by a 1-2 double overtime loss to Hartwick. Most recently, Fairfield rebounded with a 2-1 victory over Robert Morris to even their record to 3-3 on the season. Senior Ben Wignall and Don Junior-Bobe ‘21 are tied for the team lead with six points to date. Wignall has two goals and two assists while Junior-Bobe leads the team with three goals on the campaign. Freshman Justin Vergin and Angus Hastings ‘18 have also tallied a goal this season. Fairfield looks to make it two wins in a row when they welcome Temple to Lessing Field this Saturday, Sept. 16 for a 7 p.m. kickoff in what is to be their last non-conference matchup of the year before entering Metro Atlantic Athletic Conference play. 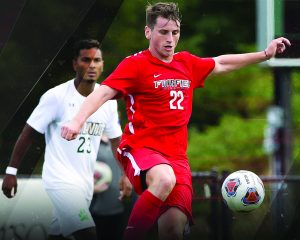 On the women’s front, the Stags began their season in beautiful Hawaii as they took on Houston Baptist and Hawaii in the Outrigger Shootout. Fairfield topped Houston Baptist in their first game 2-1 in double overtime and lost the other contest to Hawaii 1-2 in overtime as well. Back at home for their third game of the season, the red and white was shutout by Big East foe St.John’s 0-2 at Lessing Field. The Stags then took a swing to upstate New York, taking on Binghamton and Syracuse in another pair of non-conference games. In another double overtime thriller, Fairfield ousted Binghamton 2-1. Fortune was not so kind against Syracuse two days later as the Orange shutout the Stags 0-3 as they sent them packing back to the Nutmeg State. Back at home on Lessing Field the Stags welcomed New Jersey Institute of Technology in their final non-conference game of the season, dropping the game 2-3 to make Fairfield 2-4 on the young season. Freshman Alex Madden leads the way this year with two goals and four points on the season, with Liz Dumas ‘21, Shannon Ryan ‘21, Julia McGuire ‘20, Sara Plowman ‘19 and Julia Kleczkowski ‘20 all tallying one goal on the year. Fairfield is back at it Saturday at 1 p.m. for a match against Siena in Loudonville, N.Y.