The game of baseball has been a part of my life for as long as I can remember, which is why it is arguably my favorite sport. After many internship applications during the fall and winter of 2017, one sports organization got back to me before winter break and I was thrilled to hear back from somewhere so early. The New Jersey Jackals, an independent baseball organization stationed in Little Falls, N.J., responded to my application. After two interviews, I accepted a Gameday/Broadcasting Intern position with the Jackals. Simply, this was just the beginning.

After going through two orientations, it was time for some Jackals baseball. For the first home series, there was some excitement to learn about working cameras, the music soundboard, the scoreboard, video board, pointstreak, livestream and on-air commentary. But as I quickly get accustomed to my assignments for the respective games, it makes the games more enjoyable for me, other press box interns and for the fans.

One requirement for my internship is to get to the stadium three hours before the game, so making friends with other broadcasting, and even social media, interns was not that hard. The atmosphere in the press box while figuring out what assignment each intern has for each game is also very relaxed and, if need be, there is plenty of time to ask any questions I have to other interns or to my supervisor before first pitch.

Aside from arriving early and becoming familiar with assignments, this internship gives direct contact with professional baseball players trying to make their way to the Major Leagues. Many players at this level can get a second chance to showcase their worth to Major League scouts.

On the Jackals roster, there are two notable pitchers that used to play for Major League ball clubs. The first one is Vic Black, a former Mets relief pitcher from 2013-14, recording a 2.96 career earned run average. The Jackals mainly use Black as a relief pitcher as he is trying to impress an MLB team.

“It really does not matter what the field looks like. Of course, I have to get over some spoiled things, coming from Citi Field to here [Yogi Berra Stadium]. But it’s still baseball and that has been the biggest deal I know as far as this year has gone” said Black.

“As a competitor, I want to be where the best are playing because I think I am one of the best, but injuries derail some of that so learning to enjoy where I am at right now allows me to then compete day by day” stated the former Mets reliever. 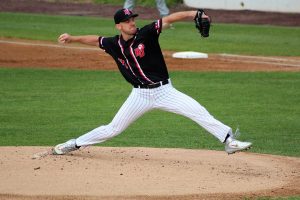 The second player is Mat Latos, who is more notably known and spent nine seasons in the MLB, recording 71 career wins.

The 6’6” tall hurler engages himself in every capacity at Yogi Berra Stadium, whether it is taking grounders at third base or shagging fly balls in the outfield, Latos is engaging with people around him. He will occasionally pop into the press box to socialize with my supervisor and just talk about baseball stories from his time in the bigs. Even on his pitching days, he will be chatting with my supervisor or some press box interns, including me, about what teammates he liked or didn’t like in the MLB and so on.

“At the end of the day, I’m just messing around [in the press box] because I’m with my teammates all the time but there are certain points in time, we cross paths with you guys and it’s not as awkward. It’s good to casually talk with you guys since I see you guys all the time in the tunnel, giving you guys high-fives” said Latos.

Being able to hear stories from the former established Major Leaguer, and have discussions about the second Top Gun movie, I learned quickly that Latos loves to casually talk in the press box, making everyone feel personal. Hearing these stories firsthand is an experience I did not account for when I applied, but it makes the internship well worth it, despite being unpaid.

“It’s personal talking to you guys where we conversate back and forth without it being awkward” said the former All-Star.

As relaxed as Latos is off the field, when he steps onto the mound, he is still a fierce competitor, just as him in his San Diego Padres and Cincinnati Reds days. His fearlessness was on display against the Rockland Boulders, a fellow Canadian-American League foe, on Saturday, June 9. After five innings of one-run ball, Latos returned to the mound for a sixth inning. Boulder infielder Conrad Gregor hit an opposite field double into the left-center field gap. Left fielder Connor Hofmann relayed the ball to shortstop Carlos Truinfel, trying to cut down catcher Marcus Nidiffer at the plate. Nidiffer purposely took out Jackal catcher Kevin Torres with an elbow and forearm to the neck of Torres to jar the ball loose.

“I defend my teammates when I feel it is necessary where some people may say that it was unnecessary. That’s not the way I looked at it. The guy went after my catcher’s neck and head area where he had an open lane to the plate. I felt like it was a cheap shot and he did not even touch home plate” said the former Broward college standout.

After Nidiffer is controversially ruled safe, Latos goes back to the mound to face outfielder Kevin Krause, looking to defend his catcher for the supposed dirty play. The nine-year MLB veteran popped a sizzling 96 mile per hour fastball inside and there was more to come. Latos then throws over Krause’s head as he steps toward Krause. Pitcher Ryan Deems sprints out of the Rockland dugout toward the mound but Latos picks him up, slams him down as pandemonium ensued and 300 Violin Orchestra blasted over the public address system. Bodies were flying everywhere as both benches and bullpens cleared. Mat Latos was defending his catcher because of the dirty hit by Nidiffer and he was not afraid of the consequences.

“I am gonna let them know that, at least when I am on the mound, those actions are not gonna fly with me. If one of our guys can get hurt, somebody has to let them know we are not going to put up with it. If I’m on the mound and nothing has been done, I am gonna send a message to say enough is enough” said Latos.

This was the first brawl I have ever seen in person, having a key vantage point in the press box being in charge of the music for the duration of the game. Moreover, I received credit from Barstool Sports, USA Today, MLB Network and Sirius XM radio as well as random fans on social media, for playing that exact pump up music during the brawl. The video of the brawl reached over 1.5 million views on Barstool Sports’ Instagram page in addition to almost 1.6 million views on Sportscenter’s Instagram account among many other pages.

From working the cameras and different equipment to Mat Latos frequently visiting the press box to tell stories to the independent league brawl that went viral with Latos on the mound, this internship with the New Jersey Jackals has been one experience that I will remember for a lifetime and an experience I will continue to enjoy for the remainder of the summer. Being a part of the New Jersey Jackals genuinely displays that the Can-Am League does not mess around for real and neither does Latos when it comes to defending teammates on the diamond.