Fairfield’s field hockey team hosted No. 16 ranked Virginia on Sept. 25, but was held scoreless as the Cavaliers picked up the 4-0 victory over the Stags.

Coming into the game, the Stags have struggled, losing in five consecutive games and looking to bounce back against Virginia. When asked about the team’s preparation to this contest, head coach Jackie Kane stated “we’ve had a really tough schedule this year, some of the games have been 50/50 for us. They were all one goal games, which is really tough on the girls, but we’re just trying to get better every single time.” 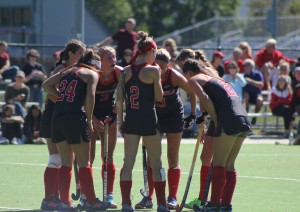 Virginia dominated most of the game as they finished with 22 shots compared to Fairfield’s seven. The Cavaliers also had a total of eight corner kicks compared to the Stags’ three.

Although Virginia’s offense was clicking to start the game, the Stags defenders were able to put pressure on the Cavs. While the visiting team got off five early shots to start the game, Fairfield was able to hold off the majority of Virginia’s offense, but would allow a goal off a penalty corner off the stick of Erin Shanahan. Going into halftime, the Stags were down by just one, looking to bounce back.

The second half would be all Virginia as they pounced all over the Fairfield defense. The Cavaliers carried the momentum from the previous period, as they would score their second goal of the game just four minutes after start of the second half.

Virginia’s offense was not over just yet as they would strike again to add two more goals coming just five minutes apart of each, the first coming in the 64th minute followed by another one in the 69th minute. Virginia would finish the game with a final score of 4-0 as they shutout the Stags to push their losing streak to six.

The lone bright spot for the Stags was senior goalkeeper Caitlin Bennett, who finished the game with a total of 11 saves. When asked about Bennett’s contribution to the game, Kane said, “She really kept us in the game and that’s her job, it’s very difficult to have all those scoring opportunities put in front of her and she came up huge, she really did.”

“They have to believe, they have to be engaged all the time, their attitude has to stay positive. They have to keep it fun. When their heads get down and it gets discouraging, they fall apart and I want them to keep having fun,” said Kane on what her team needs to do after another heartbreaking loss. The Stags look to bounce back when they travel to Hofstra on Sept. 30, followed by a Sunday home game where they host Providence.