One of the most inspiring sights to see in professional sports is the ability for an athlete to overcome an injury and not only return to the game, but return playing better than ever. For audience members, there seems to be more sentimental value behind a player’s victory if they’ve overcome obstacles to get there. The 2017 U.S. Open Championship provided no shortage of these inspirational stories.

By far the defining moment of this year’s tournament was Sloane Stephens’ unexpected run to the women’s singles championship. Not only was the 24-year-old unseeded at the U.S. Open, but at the beginning of August 2017, she was ranked 957 in the world after enduring a year-long left foot injury that kept her out of the end of the 2016 season and the majority of 2017. 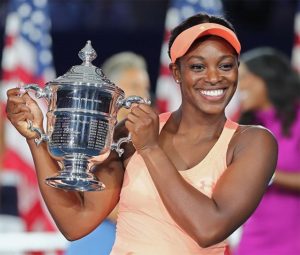 After making her come back to the tennis circuit at Wimbledon, Stephens performed exceptionally well in August, making it to the semifinals of the two major U.S. Open warmup tournaments in Toronto and Cincinnati. Stephens followed up her stellar hard court summer with her first appearance in the U.S. Open final, taking down some big names in the tennis world, including Venus Williams, along the way. Her 2017 U.S. Open culminated in an emotional 6-3, 6-0 victory over fellow American and her best friend on tour, 22-year-old Madison Keys.

Despite his injury-plagued 2015 and 2016, Nadal came back with a vengeance in 2017, earning an appearance in the Australian Open final, winning Roland Garros and the U.S. Open and regaining the world No.1 ranking.

Both U.S. Open finalists also endured their share of injuries at the start of the 2017 season. Madison Keys had surgery on her wrist after her second round loss at Roland Garros this year, and Kevin Anderson suffered a hip injury in 2016 that continued into 2017. Despite these injuries, both athletes surmounted them to make deep runs at the U.S. Open, both reaching their first major finals at the tournament.

Maria Sharapova, while having been out of the game for a drug suspension and not an injury, also made a comeback at this year’s U.S. Open. The former world No. 1 defeated No. 2 seed Simona Halep in the first round and reached the round of 16 before falling to Anastasia Sevastova. Despite the Russian’s impressive comeback, some players found issue with her return, like No. 5 seed Caroline Wozniacki, who argued it was unfair for Sharapova to play on Arthur Ashe Stadium while the No. 5 seed played on an outside court.

Perhaps the most enthralling feature of this year’s U.S. Open for American fans was the fact that all four women’s semifinalists were American: Sloane Stephens, Madison Keys, Venus Williams and CoCo Vandeweghe. The last time this happened was in 1981, when the semifinalists were Tracy Austin, Martina Navratilova, Chris Evert and Barbara Potter. The American domination at this year’s U.S. Open certainly gives hope of a rise in American tennis for the 2018 season.

One of the most noteworthy aspects of these women’s semifinalists were the two younger athletes of the group, Stephens and Keys, who were the eventual finalists. Both Stephens and Keys peaked early on in their careers, Stephens defeating Serena Williams in the Australian Open quarterfinals to reach her first grand slam semifinal in 2013 and Keys also reaching the Australian Open semifinal in 2015, both at the age of 20. However, due to injuries, neither player was able to follow up their breakout grand slam performance until this year’s U.S. Open.

Last but not least, we can’t forget about U.S. Open semifinalist Juan Martin Del Potro, who came back from two sets down in his round of 16 victory over No. 6 seed Dominic Thiem and took out Roger Federer, the favorite to win the title, in four sets in the quarterfinals. His victory over Federer prevented the long-awaited first time meeting between Nadal and Federer at the U.S. Open that many fans had been anticipating since the draw came out. Further, this was by far the Argentine’s best grand slam performance since he won the tournament in 2009, defeating Federer in the final.

After a year where Federer and Nadal dominated the majors, tennis fans can’t help but wonder if we’ll see the same supremacy of these two longtime rivals in 2018, or if the reemergence of Novak Djokovic, Andy Murray and Stan Wawrinka on tour will provide more competition for the major titles.