Fairfield’s field hockey team held its home opener on Friday, Sept. 16 hoping to get back in the win column, but failed to pick up the victory, losing 2-1 in a heartbreaker in double overtime to University of Pennsylvania.

Both teams played competitively, especially on defense, as the teams struggled to get into a scoring position. Defensively for the Stags, senior goalkeeper Caitlin Bennett led the way as she saved a total of 10 shots. When asked about the play of her goalkeeper, head coach Jackie Kane said, “She definitely kept us in the game, which is really important, that’s her job.”

The game got off to a great start as both teams came out the gate aggressively, battling for a position. Battling off a heavy defense, Penn would strike first after 30 minutes of play when Sofia Palacios snagged a rebound off the post and knocked a quick shot for the first goal of the game. Penn headed into the half with a slim 1-0 lead. 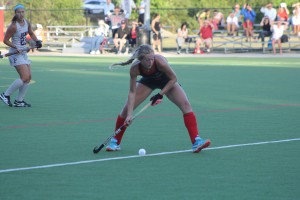 Graduate student Hannah Pike scored the Stags’ lone goal of the game as they fell to Penn 2-1.
Alfredo Torres/The Mirror

The Stags bounced right back into the game, as they scored to tie the game just three minutes into the start of the second half. Graduate student Hannah Pike inserted a penalty corner to Maclaine Matties ‘17, who without hesitation swung it right back to Pike and connected for Fairfield’s first goal. “They turned it up a notch from the first half to the second half. That first goal in the corner really gave us a little bit of energy; we just needed to capitalize on that goal and get another one,” said Kane of her team’s start to the game.

Unfortunately for the Stags, it would be their lone goal of the game, even though they would find several scoring opportunities to close out the half. Penn had a couple of opportunities to close out the game as well as they came to the end of regulation with six consecutive penalty corners, but failed to convert, forcing the game to overtime tied at one.

The first overtime period saw Penn send a few shots at goal, but failed to get past Fairfield defenders as the Stags struggled to get a shot off. Only Ann Burgoyne ‘17 would come close to knocking down a goal.

The second overtime period was a continuation of the previous as Burgoyne had a golden opportunity to send Penn packing, but shot just wide of the net allowing Penn to counter with a long pass to the other side of the field, where Palacio sent a shot just past the goalkeeper to win the game 2-1.

After the game, Kane spoke of her team’s effort and resiliency as they look to bounce back. “My heart breaks for them; it really does because they worked so incredibly hard today and this is a team’s whose record doesn’t show their heart, their desire and their commitment. I hope that this will bring them together tighter than they are now.”