While many at home were preparing for their Super Bowl festivities, the Fairfield University Women’s Basketball team had some business to take care of as they hosted the visiting Metro Atlantic Athletic Conference foe Manhattan Jaspers on Sunday, Feb. 4. The Stags took care of business on Super Bowl Sunday, battling to edge the Jaspers by a final score of 55-52 in a tightly contested game. With the win, the Stags improved their record to 9-13, 6-5 in conference play.

Fairfield came out of the gate firing as they started the contest going on a quick 9-0 run, placing the Jaspers in an early deficit. Senior Samantha Cooper got things going early for the Stags, scoring five of Fairfield’s first nine points as the forward connected on a shot from beyond the arc and on a layup just inside the paint. In the quarter, Fairfield would hold its biggest lead of the game at 13, following another layup by Cooper to make the score 20-7. The Stags would go on to dominate the quarter, outscoring Manhattan 20-10 in the opening quarter while shooting 57 percent from the field.

The second quarter of play saw the Jaspers slowly battling back to make the game closer, but Fairfield fought off just enough to hold the lead for the entirety of the second quarter. Manhattan made things interesting as they went on a scoring run of their own with less than four minutes remaining in the quarter as they trailed the Stags by nine points with a score of 29-20. The Jaspers would score six straight points to cut the deficit down to just three, but the Stags would weather the storm as they went on to close out the second half up by five as Fairfield led 31-26. Cooper lead all scorers early as she registered 11 points in the first half of play.

The third quarter saw a battle between both teams as Manhattan tried to fight its way back into the game while the Stags looked to hold off the Jasper offense. Both teams would go back and forth as they exchanged buckets but eventually Manhattan’s resiliency would pay off as they battled all the way back after a layup by Manhattan’s Gabby Cajou tied the game at 42 to close the third quarter.

Manhattan would carry the momentum to start the fourth quarter as they connected on their first shot from the field in the quarter to give them the slim two-point lead at 44-42. The remainder of the quarter would see a battle as both teams looked to come out victorious by the end of the quarter. The final quarter of play saw two ties and four lead changes.

Tied at 46, Sam Kramer ‘20 would connect on a jumper to give the Stags a two-point edge only to be answered back by a three-pointer off the hands of Manhattan’s Amani Tatum to give the Jaspers a 49-48 lead with 2:30 remaining in the contest.

The Stags would answer back by scoring four straight points coming off Khadidiatou Diouf ‘19 and Kramer to regain the lead 52-49. But Manhattan would not let up, as they connected on another layup to cut the deficit down to just one point. Unfortunately for Manhattan, that would be the final field goal they connected on as the Stags would close out the game 55-52 following a couple of free throw shots from Macey Hollenshead ‘18.

For the Stags, Cooper lead all scorers with a game high 19 points while Hollenshead added 14 points and three steals and Kramer chipped in 11 points in the winning effort for Fairfield.

The Stags look to carry the momentum and make it two wins in a row on Thursday, Feb. 8 when they travel to New Rochelle, N.Y. to take on the Iona Gaels. 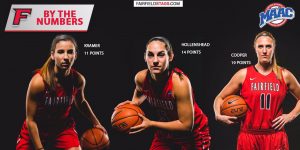