The Fairfield University Women’s Lacrosse team opened up the 2018 regular season this past Saturday, Feb. 10 in great fashion by cruising by Holy Cross to the tune of a 14-5 victory. “It sets the tone. I think we really wanted to come into the season on a good note, we wanted to execute our game plan, all of that combined to give us the win and it was a good feeling for sure,” said head coach Laura Field of the season’s first win.

Junior Kathleen Hulseman lead the way for the Stags in the victory over the Crusaders as she finished the game with a career high six points as she registered three goals and three assists. When asked about the junior’s performance in the home opener, Field said, “she is becoming a very good leader for us on the field. Absent from the goals and the assists, which are hugely important to our success, it’s more of her persona and how she takes the field. She certainly is buffeted by a really good group around her of leaders of seniors all the way down to freshmen but it was nice to hear her voice, to see her get out there. The goals and assists don’t hurt in terms of her performance.”

Holy Cross got things going early by scoring the game’s first goal just three minutes into the start of the game. Unfortunately for Holy Cross, that would be the only goal they would score in the first half of play as the Stags would go on to dominate for the remainder of the game. Fairfield would go on to score six consecutive goals in the first half off the hands of four different Stags.

Senior Brooke Gallagher scored the first goal for the Stags to tie the game at one. Hulseman would follow up by scoring her first of three goals on the game to give the Stags the slim 2-1 lead. Following her goal, Hulseman would assist on the next goal as she dished off a pass that found its way to the stick of Lily Crager ‘19 who converted her first goal of the season to push the Fairfield lead to two.

The next two goals would come off the stick of captain Olivia Russell ‘18, assisted by Crager and Brenna Connolly ‘18, respectively. After already scoring one goal in the half, Crager would add another goal for her second in the period to end the half, giving the Stags the 6-1 advantage heading into the half.

Once again, to start the half, Holy Cross would strike first registering their second goal of the game only to be answered back by another goal off the stick of Hulseman, her second on the game, to give them a 7-2 advantage. In a 10-minute span, the Crusaders would tally three more goals to give them five goals on the game. That would be all the scoring the Stags would give up as the Fairfield defense forced Holy Cross to struggle for the remainder of the game.

The Stags would go on to score seven more goals in the half off the sticks of seven different Stags, including Kelly Horning ‘21, Diana DeVita ’21, Mary Smyth ‘18, Taylor Mitchell ‘19, Gallagher, Connolly and another goal from Hulseman to give her a game high three goals. The Stags’ defense would be too much for Holy Cross as they would struggle to get another goal as Fairfield would close out the game with a 14-5 season opening victory. “We saw a lot of kids step up, we’ve had one or two main scoring threats in the past couple years, we had nine goal scorers on Saturday. That’s something that we were looking, our defense executed the game plan, our goalie played well in her first collegiate win, so those were all things that we are checking off the list,” said Field of the win. 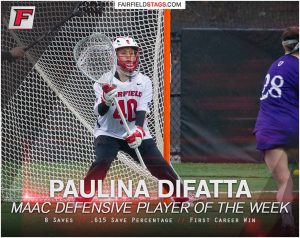 Although Hulseman lead the herd offensively, it was goalkeeper Paulina Difatta ‘20 who helped limit the Holy Cross offense in her first collegiate start at the cage as she turned away eight shots. “She had a great game, she’s been off for a year rehabbing her ACL so we weren’t really sure but she played well across the board. She made good decisions on her clears, she made good clean saves, it was a complete performance that we really needed from her,” said Field.

The Stags will be back on the field Wednesday, Feb. 14, as they travel to take on in-state foe UConn for a 3 p.m. matchup. “UConn is a very strong team, they are very fast. There’s a nice little in-state rivalry going, to get this game I think we do have to clean up a little bit of our mistakes. We have to make sure we play a whole 60 minutes, giving up a run in the second half like we did against Holy Cross will be tough for us but I think they’re all pieces of the pie that we can put together. It’s early for both of us, I think both of us are a bit untested, so we’re going into it focusing on ourselves, focusing on our game plans and making sure we do what we need to do,” said Field as the Stags prepare for their Valentine Day’s matchup.