As the sun shone down upon the Walsh Athletic Center tennis courts, the warm feeling of victory wrapped around the Fairfield University faithful. For the third time in three matches, the Stags have walked off the court as victors in Metro Atlantic Athletic Conference play. Although the squad has dropped 12 matches thus far this season, it is obvious that the team is rounding into form as spring comes alive.

The 7-0 shellacking of the Monmouth Hawks on Monday, April 3 gave Fairfield fans an exciting match in which the Stags looked thoroughly dominant from start to finish. Beginning with doubles and finishing up with singles, Fairfield’s relentless attack on the offensive end enabled the Stags to put the Hawks on their heels in every match.

On the singles side, it was much of the same for the Stags as Stuhlmann, Aragones, Prinos and Jessica Pil ‘20 all took home wins. At the first singles spot, Stuhlmann won 5-7, 6-0, 10-8 in a riveting back-and-forth match. 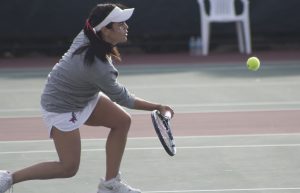 Junior Nicole Aragones picked up wins in both singles and doubles against Monmouth this past Monday. Alfredo Torres/The Mirror

For head coach Jeff Bricker, the raucous Fairfield fan section at the match propelled the likes of Stuhlmann and Pil to their impressive singles victories.

“The fan support was huge today,” said Bricker. “When the team is loud, it gets everybody else loud. When Sarah and Jess were in their third set tiebreakers it was important to get that support going to give you that little extra umph. I thought we did a great job on that end.”

With the help of the fans, the inspired play of the Stags lifted them to their first win in what hopefully becomes a fruitful month of April for the squad. At 3-0 in MAAC play at the moment, Bricker could not be happier with the position the team is in.

“It is really exciting and it feels great having the team play at a high level,” Bricker said. “We have worked really hard throughout the whole year to get to this point and we are starting to bear those fruits.”

Fairfield looks to move their MAAC marker to 4-0 when they welcome the Niagara Purple Eagles to the WAC courts for a 3 p.m. match on Sunday, April 9.