Concerts that feature more than two bands are always bangers. On Nov. 14, Bikini Trill, The Score and New Politics put on a concert at the Warehouse at FTC. The three bands are all currently on a joint fall tour and stopped by in Fairfield for a high-spirited, vibrant and exuberant night filled with good times and good music. 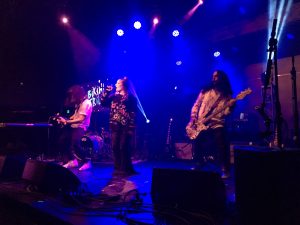 The opening act, and the first band of the night to perform, was Bikini Trill. This was a name I was unfamiliar with until this concert. I had previously known about The Score and New Politics, so getting to know Bikini Trill and listen to their music for the first time was exciting.

Bikini Trill is a surf-pop trio from Los Angeles, Calif. The band themselves are a seemingly new band. They’ve described their music as a blend of “electronic, hip-hop drums, skank island guitars and powerful pop vocals” all to create a sound that they compare to the likeness of No Doubt and Thievery Corporation– following that electronic, rock genre.

The first time the members got on stage, I immediately felt their LA surfer, but also a bit of a cosmic vibe. Their energy is out of this world and very entertaining. The moment the band began their slot, guitarists Roach and Tony, instantly started getting into the music as lead singer, LJ, made her way onto the stage. The band members themselves were very passionate about their performance, but also loved engaging with the audience, and the audience with them.

The band played some of their songs such as “Need Me,” “Smoke a Jay and Watch Yourself Dance” and “2:25 AM.” Their music follows a very fun-filled vibe that is definitely chill, but also got the audience pumped for the rest of the night. Bikini Trill’s music also very much follows with their Surfer-UFO kind of psychedelic aesthetic. My personal favorite of the songs played was “Sticky Treez,” which followed that similar vibe, but was also a unique and an easy to rock-out to sound.

They are also a band that seemingly loves to interact with their fan base. During the concert guitarist Roach was handing out free stickers and buttons, while thanking audience members for coming out to see them perform. It was actually quite sweet and wholesome, and, personally, I hope more people listen to them.

Bikini Trill’s songs are definitely an entertaining listen and I’d recommend them to anybody who just wants to chill out and listen to some fun tunes. 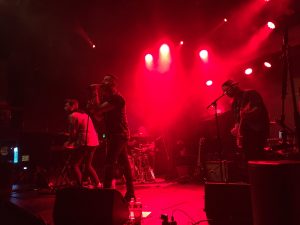 After Bikini Trill, The Score took the FTC stage. The Score definitely brought things to a different level with their energetic, rocker vibe. The Score, consisting of frontmen Eddie Anthony and Edan Dover, are a New York-born, LA-based indie and alternative band. In 2017, the band came out with their full length album “ATLAS.” Recently, the band unveiled their new single, “Stronger,” and, on Oct. 26, they released another new single, “The Fear.”  Prior to this performance, I had the privilege of interviewing The Score, so I was definitely thrilled to witness their performance live.

A lot of the Score’s music is dynamic and hype worthy, but also pretty motivational. Songs like “Revolution” and “Higher” make audience members want to thrash and rock out to their songs. Within some of the newer music they performed, like “Stronger,” you can see how the band is attempting to differ their sound with a more hip-hop influence rather than their usual rock. I think it was a good blend of what they usually have mixed with their new, kind-of fresh, sound.

Personally, I enjoyed it when the band did a cover of the classic White Stripes’ song “Seven Nation Army.” The song is a favorite scream-along amongst my friends, and it’s always a good time when a band covers a classic everyone knows. Plus, it definitely got the audience pumped.

As for the performance itself, it was an exciting ordeal. Throughout the songs performed, the lights and overall production changed to match each song’s different rhythm. Aesthetically, it was effective and made the overall experience a lot more lively and enjoyable. The overall presentation got the audience excited to jam out to The Score’s songs and, through various points of the performance, Anthony would interact with people in the crowd.

The Score’s music is definitely a high energy and a highly entertaining listen. Their alternative, indie-rock style is compelling as are their easy to rock along to rhythms. The Score is definitely a band to check out. 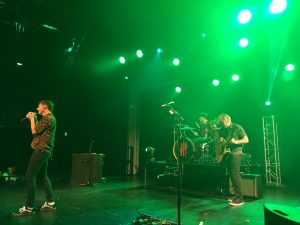 Finally, New Politics took the stage. I had seen New Politics in concert when they were the opening act for Paramore and Fall Out Boy on the Monumentour Tour in 2014. Four years later, I was happy to see the band thriving.

The New Politics music had a range of variety branching from high energy songs to some more slower songs. My personal favorite is “Harlem” because it reminds me of my friends back home, but also it’s a very upbeat and enthusiastic song to bop to. Another really great one is “One of Us” from the lyrics to the overall rhythm. As for what songs they played, Boyd mentioned during the performance that they listened to fans on social media and chose music they wanted to listen to. Their music definitely had everyone in the crowd jumping and dancing around.

New Politics had the highest energy. Throughout the entire performance, Boyd’s rather vigorous dancing hyped up the place, especially during the performance of the song “Yeah Yeah Yeah,” when Boyd headed into the crowd and started a conga line with the audience members. Not only that, but the vibes amongst the band members was also wholesome and added an overall good vibe. One of the best, and even funniest parts of the performance, was when Hansen began to crack up during one of the songs, causing everyone to laugh in the audience as well.

The band members’ interaction with the audience members did not stop at the conga line. The band was constantly reaching out for high fives and sending ‘heart symbols’ with their hands. The passion they had for their performance, and even for the members of the audience, made the entire experience very enjoyable and enthralling.

New Politics is a very good and wholesome band that has a lot of good bangers to jam out to. Just like the other bands to perform that night, they are a must listen and I would recommend them to anyone who wants some good tunes for a fun night.

Overall, the three bands were able to create a really fun filled atmosphere that had the crowd rocking out to their different styles of music. Their performance resulted in a positive and exciting filled night.