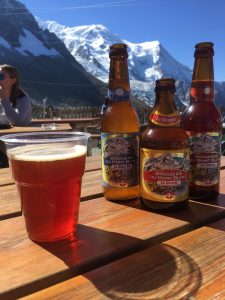 A traditional day in Switzerland is paired with Brasserie du Mont Blanc and a view. Nicholas Anthony/The Mirror

An attempt to avoid Spain’s heat in search of a familiar autumn chill resulted in hiking alongside mountain goats in the alps, steins of Bavarian beer at the peak of Mont Blanc and afternoon strolls along the Rhone river in Geneva.

In Madrid, the climate is often compared to that of southern California — arid summers and cooler winters. Spaniards often express their contempt for the predictable weather patterns of the Iberian Peninsula through rhyme, “Nueve meses de invierno y tres meses de infierno.” The English translation is: “Nine months of winter and three months of hell.”

“Infierno” occurs throughout the summer months from mid-June until late September. In the capital city, the center of the country, there is no escape from the heat.

Daily temperatures skyrocket to a scalding 90 degrees Fahrenheit on the city streets and cool to high 70’s at night. Most apartment complexes in Europe, including my own, attempt to save through energy consumption and do not provide air-conditioning units for tenants.

Just three weeks after our arrival, we had enough of the sweltering days and sleepless clammy nights and could not wait for the arrival of nine months of ‘invierno’ (winter), starting from mid-to-late October.

Avoiding sporadic late summer heat spells of Madrid became our first priority on the weekends of September. Luckily, travelers can take advantage of Europe’s size. Most trips to the northwestern and central regions of the continent consist of two-hour flights and a cab ride into major cities. Traveling country to country in Europe is similar to flying state to state in the U.S.

As we had already gone to the coast and to Mallorca, flocking towards the French Alps was our next best opportunity to cool off.

In the middle of September, we had researched the most renowned alps locations, which lead us to Geneva. The second largest city in Switzerland, located in the southwest at the mouth of the Rhone River, was closest to our destination, Mont Blanc. Geneva was also surprisingly one of the least expensive flights out of Madrid.

Geneva’s positioning on the Rhone and relativity to the French border allowed us to stay in the city for the weekend and take a Saturday day trip to the mountain. We were also able to enjoy its autumn temperatures.

We enjoyed the liveliness of the downtown area while walking along the edge of the river. I had never felt as if I had visited a more cleanly city, although Geneva was the most expensive place I have ever visited. A meal for two that would cost no more than €35 in Madrid was at least €65. Aside from a few attractions such as parks, museums and historical buildings, there isn’t much to say about the city. It seems to accommodate more for business and government travelers.

The highlight of the trip was experiencing the magnificence of Mont Blanc. Despite having to take an hour and a half bus ride to the base of the mountain just over the border of France, the trip was by far one of the most fascinating adventures I have had abroad.

By cable car, about 70 to 80 passengers can take a ride halfway up the mountain to where a small restaurant lodge is located. From there, one can decide if their body is suited to make the following ascent up to the peak of Mont Blanc by a second tram. At this point, they told us that altitude sickness occurs often on the second half of the trip up. We were too eager to let this spoil our trip, though we all ultimately experienced the effects of the height.

After rocking side-to-side and about an 85-degree vertical climb at close to 30 miles per hour, we made it to the summit (12,602 ft.). The view from the top was absolutely breathtaking as we stood above the clouds and gazed upon white snow-top mountain peaks. It was a view that everyone should see at least once in their life.

We then descended down halfway and were able to sit at the restaurant, watch the incoming and ongoing tram cars, witness professional climbers scale the cliffs surrounding us and most importantly, drink rich Bavarian beer while enjoying a warm soft dough pretzel. As you sat, small mountain goats would approach to steal your food.

Mont Blanc was by far my most valued trip and I would return in a heartbeat to witness the Alps once more. The destination is worth the cost.