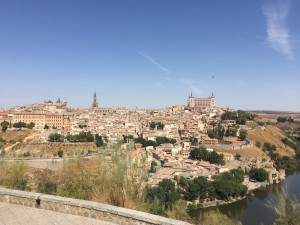 A weekend in Mallorca will cost you, but a day trip to Toledo is inexpensive and to students, more preferable.

One trip, scheduled a week in advance, requires outrageous air fares and hundreds of euros, while another is only a 16 euro, round trip rail ticket.

If you are studying in the city, Mallorca is a luxurious weekend getaway. The Balearic island, located in the middle of the Mediterranean, is east of Ibiza, a 50-minute flight from Madrid.

In Sant Llorenç des Cardassar, a small municipality of Mallorca, one can find the bright sandy beaches of Cala Millor. Tourists can snorkel within caves and above coral reefs, jet ski and parasail, hike on rocky cliffs overlooking the clear Mediterranean water, and sit at the Café del Sol to drink daiquiris or mojitos at the edge of the sand.

Our memories of the mornings, resting on our balcony, enjoying coffee while gazing out at the breathtaking view of the shore are unforgettable; we would return tomorrow if we could. However, after knowing what we spent, this trip was way beyond our budgets.

Most students set aside a fixed amount of savings before traveling abroad. Their gauge is based upon the advisory of others who have traveled to the same locations. Universities adjure travelers to have a minimum of $4,000 at their disposal, although I’ve heard stories from friends bragging about their stipend of $15,000 to $20,000, pensioned by parents for extravagant trips.

In a day and a half, myself and one other person had spent close to 800 euros collectively. Aside from hotel and flight fees, which accumulated to 400 euros, the rest of our savings were spent on meals and, reluctantly, on a taxi.

Sant Llorenç des Cardassar is about a 45-minute trip from the airport in Palma. Originally, the cab driver informed us that the ride would be around 50 euros. After a ride consisting of many wrong turns and polite conversation, we had arrived at our hotel with a fee of 98 euros.

Horror stories were told to us in the past about similar situations and now it had happened to us; we were ripped off.

In the future, we will be aware of people’s motives when it comes to cash; just because someone seems nice does not mean they are. After the trip, we were informed by our professor that “when you are in a cab and the driver is acting suspicious, do not hesitate to question them. Cab drivers are there to assist you, not to take advantage.”

That will never happen to us again.

Other Fairfield students urged us to take the school trips after our Mallorca experience. The majority of students at Saint Louis University of Madrid, our home base for the semester, tend to seek travel on these trips, as they are a more feasible option. SLU offers bus and train trips in and out of Spain. Travel, housing and activity fees are included within the purchase. It provides students with a well-planned and structured weekend vacation consisting of tours, access to tourist hotspots and pub crawls in locations like Spain, Portugal, France and Morocco.

“The trip that SLU Madrid offered in Toledo was amazing,” said Maddie Gatzounas ‘18. “We were able to visit historical locations with free admission that we otherwise would have had to pay for. The school often provides pleasurable four to five star hostels with meals and drinks included in the initial payment fee. I will always consult the trips that the school offers first over individually planned vacations.”

Toledo, an ancient location established in the 11th century, is south of Madrid and the most commonly attended day trip of SLU. As one of the main stops in Miguel Cervantes’ story “Don Quixote of La Mancha,” Toledo is referred to as ‘The Imperial City of Spain’ and is known for its multicultural upbringing of Islam, Judaism and Christianity.

Travelers can witness an overview of the fortified medieval city surrounded by a moat, from double decker bus tours in the mountains. You can also explore the silent and narrow cobblestone side streets or the massive cathedrals inside the city walls.
Toledo is also accessible by train if groups prefer to go on their own. The rail fee is 16 euros and the double decker bus tour costs 10 euros each; about the same cost as SLU’s Toledo day trip.