That’s the number of individuals that inhabit our lush, green planet, but unfortunately, 1.3 billion people are living under conditions of extreme poverty, despite recent strides in technological advancement.

In comes the Global Citizen Festival, a benefit concert occurring the last weekend of September with the goal of ending extreme poverty by 2030. Curated by Chris Martin of Coldplay, the festival’s fifth iteration boasted a lineup of tremendous magnitude, featuring Rihanna, Metallica, Kendrick Lamar, Usher and Eddie Vedder, to name a few artists.

While the music was the highlight for the 60,000 citizens who crammed into Central Park’s Grand Lawn, focus never shifted from the emphasis on global humanitarianism, resulting in over 1.75 million actions taken online. These actions ranged from tweeting the Tanzanian President to raise the legal age of marriage to signing an online petition to raise awareness of HIV for adolescent girls in Africa. 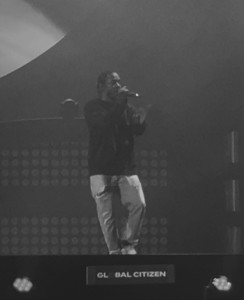 To start off the evening, hosts Chelsea Handler and Hugh Jackman rode in on a two person bicycle and exchanged banter — and some rap verses — before introducing Major Lazer and MØ as the first headliner of the evening. Diplo and company delivered a frenetic performance complete with t-shirt cannons and bass drops galore. 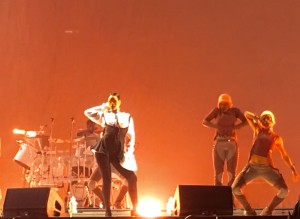 Rihanna closes out the 2016 Global Citizen Festival under her “Umbrella.” Andrew DaRosa/The Mirror

Joining Handler and Jackman as hosts for the evening included Deborra-Lee Jackman, Neil Patrick Harris, Priyanka Chopra, Salma Hayek Pinault and Seth Meyers, who each outlined the eight principles of the Global Citizen initiative. Most notably, Harris ushered for the crowd to “give a sh*t” about universal sanitation.

Additionally, a plethora of guest speakers spoke on the injustices facing humanity and beckoned the crowd to stay active global citizens past the events of the day. Between Queen Rania of Jordan’s “#EducationCannotWait” initiative for Chad, Syria and Yemen to Minority Leader Nancy Pelosi advocating for the power of the American people during the upcoming election, this year’s citizens were subjected to a wide array of speeches that evoked strong emotions from an already devoted crowd.

Perhaps the most profound of these speeches occurred before the final headliner Rihanna hit the stage, which centered on the much debated topic of the Syrian refugee crisis. U.S. Ambassador Samantha Powers and husband of recently deceased refugee advocate Jo Cox, Brendan Cox, called upon three Syrian refugees to speak of their experiences, which even brought tears to the hosts’ eyes as they reiterated the perils and sadness associated with their experiences.

The music brought the messages even further with a genre-bending assortment that took on elements of EDM, folk, pop and metal. The aforementioned Major Lazer and MØ were the first of five headliners who performed, including Metallica, Rihanna, Kendrick Lamar and Demi Lovato, who filled in last minute for Selena Gomez.