Critically acclaimed and technically accomplished, the late 20th century Italian artist, Leonardo Cremonini is known for his figurative works and striking use of color. Even though Cremonini died in 2010, the Thomas J. Walsh Art Gallery’s current exhibition features 35 of his works, which were provided by the William Louis-Dreyfus Collection.

Director of Fairfield University’s Thomas J. Walsh Art Gallery, Bellarmine Museum and University Curator, Linda Wolk-Simon, explained that Louis-Dreyfus, one of the greatest art collectors of the 20th century, owned over 100 of Cremonini’s works. Louis-Dreyfus was the father of actress Julia Louis-Dreyfus, who recently mentioned her father’s death while accepting her Emmy for “Outstanding Lead Actress in a Comedy Series” on Sept. 18, only two days after his death.

Wolk-Simon had the privilege of meeting the late art collector shortly after she began working at Fairfield. After repeatedly seeing Cremonini’s paintings on display at the Louis-Dreyfus Collection, Wolk-Simon said that she asked about them and discovered that like herself, Louis-Dreyfus was disheartened that Cremonini was not better known. Wolk-Simon then asked if she could do an exhibition from his collection at Fairfield and Louis-Dreyfus enthusiastically agreed. 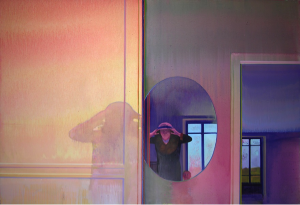 “He was really the most generous partner, collaborator, sponsor and benefactor of this project and was really excited about it,” said Wolk-Simon. “He was really passionate about Cremonini’s work; we had a lot of conversations about what would be the right works from his collection to include and I can only say what a great sadness it is that he passed away before the exhibition opened. But I feel like he’s here in spirit and we have dedicated the show to his memory as a tribute to his great generosity and his vision as a collector.”

Cremonini’s work rewards those who pay close attention to the detail of his pieces. Wolk-Simon explained that careful observation is advantageous when looking at Cremonini’s works because, not coincidentally, he was a slow and methodical worker.

“If you look closely at his pictures, you’ll see that even though the surfaces are kind of flat, there’s actually a very subtle layering of paint,” said Wolk-Simon. “He had a process of applying paint and then scraping it away, so his process as a painter and our process as viewers is really meant to be sort of contemplative and meditative.” 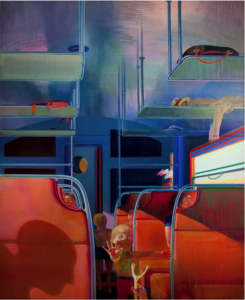 Freshman Helen Ruckes explained that although she wasn’t sure what to expect before entering the gallery, she was happy that she went.

“I didn’t previously know anything about the artist or his style; I was pleasantly surprised. Although I am not a fan of modern art, I really enjoyed spending time at the gallery,” said Ruckes.

Freshman Hailee Sullivan agreed that Cremonini’s work is worth the view.

“The colors used struck me the most at first, especially how they are used to create vintage scenery. If students are interested in artists similar to Cremonini, then they should absolutely come to see the exhibition,” said Sullivan.

By looking closely at the canvases of Cremonini, viewers can see how he utilized the capacity of his color in a beautiful and ethereal way.

Wolk-Simon said, “There’s a lot to look at and a lot to see when thinking about his use of color, light and the very complex spaces he creates. In some paintings, you’ll see little intrusions of abstract passages, as if he’s sort of playing with colorful painting or some of the trends that were current in his day. But he always seemed to pull back from them because he is a figurative painter, not an abstract painter.”

The layout of the gallery was appealing to Ruckes and as a result, she was able to look closely at each painting and appreciate the artistic decisions described by Wolk-Simon.

“It was very nicely set up and my favorite part of the exhibition was the colors that the artist used. The pale and pastel color scheme was very relaxing and visually appealing,” said Ruckes.

Wolk-Simon explained that the late 20th century largely favored abstract and conceptual art, which consequently resulted in Cremonini being marginalized as a modern artist. Wolk-Simon believed that due to his use of space, light and emotional distancing of figures, he deserves to be resurfaced as a 20th century artist. She explained that there is a resurgence of contemporary figurative painting, “so it seems that the time for a reevaluation of him is upon us.”

“He’s always been recognized as a really important, technically accomplished and interesting painter doing very compelling things. But he’s not a household name and he’s very little known by specialists today, even though he was quite celebrated and critically acclaimed in his own day. I think it’s very exciting for us to be at the forefront of returning the spotlight to a really important, major artist of the 20th century,” said Wolk-Simon.

Junior Katie Kocaj emphasized the importance and impressiveness of the exhibition.

“I didn’t know this gallery even existed and I’m an art major, but I honestly think it’s really cool and these paintings are amazing. They’re all really colorful with an abstract quality and each of them carry an interesting story,” said Kocaj.

Though not widely known today, Cremonini reached the height of his recognition in the second half of the 20th century. Francis Bacon was an early admirer of Cremonini and proposed to a gallerist the idea of writing about his work. Additionally, Director for the Museum of Modern Art William Rubin explained that Cremonini’s paintings embody a “spirit of timeless monumentality.”

Like Bacon and Rubin, Fairfield students also enjoyed having the opportunity to view Cremonini’s works.

“I would definitely encourage other students to visit, even if they are not interested in modern artwork,” said Ruckes. “Attending the opening was exciting and the atmosphere was stress-free. I believe that it is very important to experience different events that you may not be interested in because you never know what you’ll discover.”

The exhibition opened on Nov. 4 and will be on display until March 3, 2017 in the Walsh Art Gallery.