“Star Wars” fans across the galaxy are anxiously awaiting the release of “Star Wars: Episode VII The Force Awakens.” While some await the new film with excitement, others are apprehensive of how it will turn out due to the quality of the prequels and the involvement of Disney.

Set 30 years after “Star Wars: Episode VI Return of the Jedi,” the newest film will feature Han Solo and some allies fighting the evil Kylo Ren and an army of Stormtroopers.

When “Star Wars” first came out in 1977, George Lucas changed the world of science fiction films forever. The epic space opera was beloved by moviegoers and critics alike. “Star Wars: Edition IV A New Hope,” as it was later branded, along with its two sequels, “Star Wars: Episode V The Empire Strikes Back” and “Return of the Jedi,” are considered among the greatest movies of all time, and are still enjoyed to this day by fans, both old and new. The trilogy’s use of sp 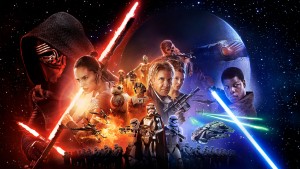 ecial effects, sound editing and music was revolutionary at the time of its release, helping to make it one of the most influential science fiction film series. According to the Internet Movie Database, “A New Hope” won six Academy Awards, including Best Sound, Best Film Editing, Best Visual Effects and Best Original Score.

The “Star Wars” franchise has spawned multiple animated series on both Cartoon Network and Disney XD, the most famous of which being “Star Wars: Clone Wars” and “Star Wars: Rebels” respectively, a trilogy of prequels that were later developed into critically-renowned video games.

Many fans of the original trilogy, who were enchanted by its clever writing, moving score and story of epic proportions, were horrified by the quality of the prequels. “Star Wars: Episode I The Phantom Menace,” “Star Wars: Episode II Attack of the Clones” and “Star Wars: Episode III Revenge of the Sith” were not well-received by many. “The Phantom Menace” and “Attack of the Clones” were each nominated for seven Golden Raspberry Awards which recognizes bad movies, and “Revenge of the Sith” was nominated for one. These films notoriously boasted clumsy writing, excessive computer-generated imagery and less than savory acting from the main cast, particularly Hayden Christensen as Anakin Skywalker and Natalie Portman as Padmé Amidala, both of which were introduced in the prequels. Christensen won two Golden Raspberries for Worst Supporting Actor for both “Attack of the Clones” and “Revenge of the Sith.”

Most viewers blame the failure of the prequels on Lucas whose skill at creating the franchise does not translate well to directing and writing. Luckily, Lucas has stepped down from directing the “Star Wars” films and instead is serving as a creative consultant for the new trilogy. This has assuaged the fears of many fans for the coming movie who were afraid that this film’s quality would be comparable to that of the prequels.

Instead, “The Force Awakens” has been helmed by J.J. Abrams, who is known for his great visual effects and storytelling as seen in “Star Trek,” “Mission: Impossible III” and “Lost.” Abrams, who is taking on a new role in directing a “Star Wars” film, has stated that he used many practical effects in “The Force Awakens” rather than drowning it in CGI, as Lucas did with the prequels. Fans were promised that the digital effects of this film would not be overpowering.

However, some still have reservations about “The Force Awakens.”

Some are doubtful that a company like Disney, which bought the rights to the “Star Wars” franchise in 2012, can pull off a movie of this scope. Others are worried about small details, such as the practicality of Kylo Ren’s lightsaber hilt, which caused a bit of an uproar from fans on online forums. Fans argued over whether the design was practical, what its inspirations were in real life and some made videos of how the character might fight with the newly designed lightsaber.

However, doubtful of the quality of the film or not, all “Star Wars” fans can agree that it will be exciting to see Luke, Leia, Han, Chewbacca, R2-D2 and C-3PO reunite on screen after more than 30 years.

Many are excited for the new characters as well. Characters such as Rey, played by Daisy Ridley, Finn, played by John Boyega and Kylo, played by Adam Driver, seem like they will be promising additions to the franchise. The actors portraying these characters are fairly new to the world of cinema, which is reminiscent of how Carrie Fisher, Mark Hamill and Harrison Ford were new to the silver screen when they first appeared in “Star Wars.”

Additionally, using the score of the original trilogy in the teaser was a stroke of brilliance. This immortal soundtrack stirred the hearts of even the most reluctant viewers of the new trilogy. Five time Oscar-winning composer John Williams will return to the “Star Wars” franchise to orchestrate the soundtrack of the new film.

“The Force Awakens” will certainly hold many special moments, regardless of whether or not its quality will be able to hold a candle to the original saga.