I had just checked into my hostel after a long day of traveling when I decided to go explore the city. I was in Galway, a quaint little port city on the west side of Ireland. As I walked toward the famous Latin Quarter I suddenly heard the unmistakable boom of a bass guitar, so I naturally ran in that direction.

I arrived inside a random pub, where a very large crowd was enjoying a local band. In that moment, the magic of Ireland hit me like an unforgettable melody; observing the area I realized there were people young and old, from completely different backgrounds all just lost in the moment dancing and singing to the music. I later learned that there were also people from Spain, Portugal, Germany, France, England, America, and even Brazil all crammed inside this random pub. So I ordered my pint and quickly lost myself too, one amongst this diverse mob of jubilant people singing through life.

I was in Ireland for the weekend by myself and I took that chance to explore my roots and see the different sides of the emerald isle. Before touching down in Dublin, I made sure to have a long phone conversation with my grandfather, and I learned that the O’Leary’s had emigrated from Cork County, a large section of southwest Ireland and apparently have a castle. Even though I would be in Galway and Dublin for most of my time, I quickly realized that history and heritage are readily accessible anywhere in Ireland.

There are a few immediately striking things about Ireland. One of the first things that I noticed was the terror that is the Irish language. Seriously, they put letters together and make sounds out of them that are crazy (for example, róisín dubh is pronounced row-sheen dove and translates to black rose). However, this became one of my favorite things about the country, as it reflects a people that truly wear their heritage proudly. 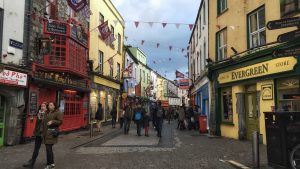 The second most striking thing about Ireland is its people. They are unabashedly friendly and helpful to everyone. Whenever I was lost or confused with directions and the bus system, locals would offer their help without question, which was made even better by their charming Irish accents. And lastly, the simple beauty of the island is unmatched anywhere in Europe. Taking the train from Dublin to Galway allowed for me to gaze at the never ending Irish countryside, with endless lush green farmland and mountains always on the horizon. Standing on top of the Cliffs of Moher was perilous, but it gave me an unbelievable look at the Atlantic ocean, mixed in between farmlands that looked like several scenes in “Game of Thrones.” If Scotland gave me a taste of the medieval, then Ireland was like waking up in a fantasy novel.

During my time in Galway, I discovered that music defines Irish culture. Busking musicians could be found on every street, each offering either renditions of traditional Celtic music or offering their own original material. As a full-blown music junkie it was amazing to realize the importance music has in this part of the world. Every street had music stores and pubs along each corner, and live music was never too far away. Locals both young and old would come together to form street bands, and the Irish music tradition would come alive with each chord. Galway also offered a simple, charming atmosphere unlike anywhere else I had experienced yet in Europe. The river Corrib divides the city between the residential area and the downtown shopping centers, and the city quickly changed its feel just by crossing the bridge. Beaches could be found just beyond the river, with families and local students alike relaxing on the shores. Wherever I went, the locals ensured that I never felt out of place, whether it be through random conversations about heritage (apparently the O’Leary’s were some amazing ship builders back in the day), or even just getting to understand more about their underlying culture, the Irish were always inviting.

Unfortunately, my time in the country was limited and I had to take a flight back early Sunday. I wandered around Dublin for my last day, taking the time to explore the equally charming city. While Dublin was not as immediately accessible as Galway, there were still plenty of attractions like the Guinness Storehouse and the famous Temple Bar district. After taking my seat on my flight back to Florence, I was already trying to convince my family to come visit Ireland. Out of all the countries I have seen so far, Ireland has been my absolute favorite, and I cannot wait to come back and explore the rest of the counties.