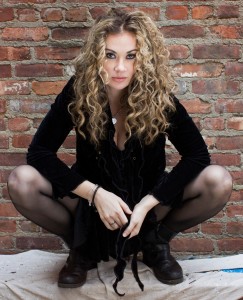 Fuchs will be kicking off her tour at Fairfield Theatre Company’s StageOne on March 6 at 7:45 p.m.

New York City-based vocalist Dana Fuchs is a powerhouse behind the microphone, full of charisma and Memphis soul. Fuchs has achieved success on and off the stage including her performance in the Broadway play “Love, Janis” and for her outstanding efforts as Sadie in The Beatles film “Across the Universe” (2007). Not only did Fuchs star in the film, but also sang on the platinum-selling soundtrack, including tracks like “Dear Prudence,” “Why Don’t We Do It in the Road?” “Helter Skelter” and “Oh! Darling.”

Fuchs portrayed acclaimed vocalist Janis Joplin five to six nights a week on Broadway which stretched her vocal limits. Ironically, Fuchs had been compared to Joplin many times before, but had never heard of Joplin’s music because it was not played in her childhood home.

“I had to learn 19 songs in eight days for the play and I remember thinking, ‘Wow! Janis is 25 years old with such a wide vocabulary’ [of musical talent],” said Fuchs. “I couldn’t be Dana when I was on stage, so that would be the end of my inhibitions. If I had the feeling of Janis, why couldn’t I do that with my own music?” said Fuchs.

Florida born Fuchs was the youngest of six and would absorb the musical influences of both her older brother and parents. Everything from Johnny Cash, Stevie Wonder and Ray Charles to The Beatles, Grateful Dead and Queen would shape Fuchs’ career. Fuchs attributes most of her musical influence to her Florida roots, growing up in a predominantly African-American school and being exposed to funk and soul, in addition to her first grade teacher who would play Donna Summers during class. When Fuchs moved to New York, blues music pushed her voice to new limits.

“At that time all of the blues clubs had the great reputation, not me,” said Fuchs. “I began performing at these clubs three nights a week which forced me to raise the bar. In this style, it is not enough to just look the part. The music has to be raw and authentic. You have to love the music and always think on your toes.”

As a musician, Fuchs is always reinventing her craft and evolving. She recalls a favorite writer who once said “a good song is never written; it is rewritten, rewritten and rewritten.”

“The best way to progress as a musician is to play live. That is where you cut your teeth and interact with fans,” said Fuchs. “Don’t give up! This is not an easy road, but what job doesn’t have its troubles.”

Fuch’s success also includes sharing the stage with blues guitarist Taj Mahal and James Cotton, a blues singer, songwriter and harmonica player. “I remember I was really nervous before playing with Taj when I was just starting out. He grabbed and hugged me back stage, then said, ‘You just got to do it.’”

Fuchs will be kicking off her tour at Fairfield Theatre Company’s StageOne on March 6 at 7:45 p.m. She’s excited to return to “rock out with a listening audience” and describes her music as a “non-religious rock ‘n’ roll church” that will make the audience rowdier than Fuchs first experience in a black church, where people were jumping around singing. Fuchs immediately felt the music extend beyond religion.

“Music celebrates life and that is what I try to do,” said Fuchs. Each performance is “a revival, a place where we can forget about life’s hardships, or embrace them in a beautiful way on stage.”

Fuchs’ tour will travel to Mexicali Live (Teaneck, N.J.) on March 7 and Iridium NYC on March 10, before the band heads west and through Europe in April. At the end of the year, Fuchs plans to record a “deeper and darker sounding record.”

“My music is about life’s trials and tribulations, but this time I want to focus on what made me want to be a singer,” said Fuchs. “The record will feature an Otis Redding tune [which I have played live before] and similar influences. I have to grind it up a bit because I’m a rock ‘n’ roll child,” added Fuchs.