Over a million people in more than 20 different countries have seen the Wadaiko YAMATO drummers live since their inception in 1993. These drummers of Japan have performed over 2,500 live shows in that span of time with audiences ranging from students in school assemblies to those interested in listening to these master drummers in their spare time.

Their following has reached its peak in recent years as they’ve toured both nationally and internationally, with destinations on this year’s tours alone ranging from the United States to Canada and Germany.

“We are striving to create a new show every two years,” said YAMATO’s founder and artistic director Masa Ogawa. “In this cycle of creation, we were trying to find a new technique of drumming and also a modern pattern of rhythm and beat of Taiko music.” 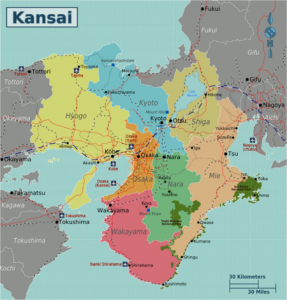 Map of Kansai Region in Japan

Founded in Nasa, an area of the Kansai region of Japan, the drummers effectively put their entire soul into their shows, which tend to be a combination of both music and theatrics. This mix of drums and action adds to the overall experience making for an unforgettable concert as well as a unique show only these drummers can pull off.

Each drummer goes through a rigorous training regimen while preparing for shows. “All the drummers are running 10 kilometers every morning,” Osawa said about the drummers’ training. “After lunch, they do training with Taiko drums for the performance. Then, when in the venue, they start building in all the things like light, sound, stage sets and Taiko by themselves. The setup continues for more than six hours.”

YAMATO also has a school where they teach people how to play drums, specifically Taiko drumming, the ancient form of Japanese drumming that YAMATO has perfected over the years. “Taiko has unbelievable power and energy in that sound and vibration,” said Osawa. “YAMATO’s performance expresses human heartbeat with Taiko sound.”

Taiko drums are by far one of the most unique instruments used today, as the sound tends to be much more dynamic than traditional drums heard in the background of today’s rock bands. This style of Japanese drumming has evolved over the years to include the choreography that goes along with the drumming as well as the musical aspect of the drums.

“We use many big Taiko drums on stage and make energetic sound vibrations with enormous power. We are using more than 30 Taiko [drums] which have different types and sizes.” said Osawa. “You can get new experience and energy for your future from YAMATO’s live sound of Taiko performance.”

YAMATO: The Drummers of Japan come to the Regina A. Quick Center for the Performing Arts on Monday, Feb. 22.