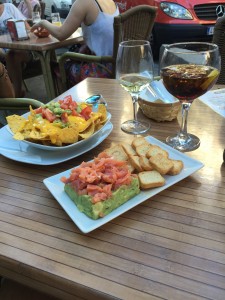 I am here in the café, Franceríe at the moment, resting at a table in the back. Many patrons surround me; musicians tuning their guitars, businessmen and businesswomen dressed in elegant suits and dresses, artists sketching their masterpieces and parents enjoying a late breakfast with their children; “Madrileños,” as the locals are referred to. They float by with a nonchalant saunter peering down at my table as I sip “café con hielo” (iced coffee), while I stare back fascinated, savoring the rich flavor of a “napolitana chocolat.” I often wonder now what life would have been like if I hadn’t ventured abroad to Madrid.

When we consider moving to new places, many of us share similar apprehensions. We question how we will adapt to foreign customs in an unfamiliar environment. Furthermore, the research and preparation required before moving can create more paranoia when we realize all that we are leaving behind. After about a week of living abroad, it is humorous to think about the unnecessary stress that was built up due to my lack of traveling.

At the time, there were three days left until my departure and I had not completed every requirement on Fairfield’s mandatory study abroad to-do-list. Family members and friends who had similar abroad experiences were spitballing suggestions about how to survive life in Europe. Additionally, it had not occurred to me that I would not be returning to Fairfield in the fall, the sheltered community that I have grown used to.

All of my preconceived ideas about Madrid — how I would travel to different locations and how the Spaniards would even understand my choppy Spanish — were swimming in my head. The main concern that every study abroad student was troubled by, the one that was bothering me the most, was how to defend myself against threats of terrorism. I wasn’t even sure if my plane was going to land; I was so nervous.

However, when the nerve-wracking day finally arrived, a few other Fairfield students and myself said goodbye to our parents. Time seemed to fly by as we boarded the plane and took off to fly across the Atlantic.

As our red-eye entered the final hour of its flight, the sun began to stream through the window of the plane, illuminating the pink and yellow clouds in the dawn sky above the coast of Portugal and the mountains surrounding. This was my first glimpse of Europe and it could not have looked more spectacular.

Around 9 a.m. we landed, blazed through customs and stepped out from the airport onto the sidewalk. This initiated our first test: getting a cab to our apartment. Madrid Barajas airport, like the rest of the city on a Sunday morning, is silent at 9 a.m.  However, when you emerge from the doors to the street outside, a line of over 100 taxis sit waiting.

One misconception that all of us had before arriving was that we would all be able to converse with the Spaniards in English. The people who inform you that everyone in Spain speaks English as if it were their second language is wrong. The moment we stepped out from the airport and attempted to get a taxi, we learned this the hard way.

Once we found a taxi and conversed with the driver in Spanish, we were surprised to find that he was much friendlier than any driver we have had in the U.S. He seemed pleased to hear his native language coming from foreigners. We then sped off to our apartments in Chamberí, a district just north of the center of the city.

The cab arrived on Calle General Alvarez de Castro, a wide empty street that resembles a neighborhood in the Upper East Side in Manhattan. The six-story buildings were lined with terraces facing the street and beautifully crafted designs were carved into the awnings.

The next lesson that we learned was that most of the stores and restaurants in Madrid are not open for business on Sundays, as the influence within society is predominantly Catholic. Soon enough, a man arrived on a scooter to let us into the apartment. “One of the few within the area with air conditioning,” he explained; we were in luck.

The rest of the week was much more productive in the city and we grew accustomed to the new culture. Our schedule had changed drastically to waking up at 10 a.m., sitting down to have coffee and a pastry at a local café before taking the metro to class. We returned home around 4 p.m. to take a siesta — a short nap in the middle of the day — followed by tapas — a daily Spanish tradition consisting of appetizers and drinks — around 7:30 p.m. before finally eating dinner around 10:45 p.m.

My favorite experience so far is dining at restaurants and shopping on Calle de Fuencarral, a commercial avenue just a few blocks away from my apartment. From 11 p.m. until 1 a.m., many people sit outside having drinks and eating for hours, enjoying the end of the summer weather.
Living in Madrid is a peaceful and enlightening experience and I am learning how to adjust to a more relaxed European lifestyle. Although I have not found a steady routine yet, I feel that as I begin to travel to new places everything will soon fall into place.