For the past nine years, the town of Fairfield comes together to discuss a book that has been specifically chosen to spark a conversation.  This year, that book is “So You’ve Been Publicly Shamed” by Jon Ronson. 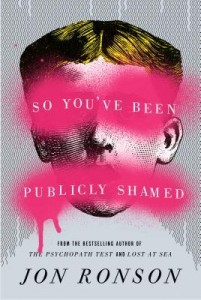 On March 8, the town of Fairfield will gather in the Regina A. Quick Center for the Arts for the highly-anticipated annual event, “One Book One Town.” This campaign was started by the Fairfield Public Library in 2006, and is a community reading initiative that involves choosing a book picked by librarians, teachers and community volunteers to inspire the entire town or city to read the same book at once.

Library director Karen Ronald said, “It has to be a book that provokes a community conversation” and reflect the interests of the community. “Everyone on the committee kept coming back ‘So You’ve Been Publicly Shamed,’” she said, because the committee felt this book covered critical themes for today, such as the power of social media and the revival of public shaming.

Ronson’s book discusses the public’s reaction to instantly judge and shame people that make a joke on social media that came across as wrong or who made a mistake. It explores how people seemed more inclined to mercilessly shame others for their faults.

In celebration of the book, the library has organized events, such as a writing contest regarding the topic of judgment, a screening of the movie, “The Social Network” and TED Talks from Monica Lewinsky that depict the themes of judgement, the use of social media and public humiliation in the book. These events take place in the month leading up to and after the main event, a discussion about the book with the author.

When asked about how Ronson felt about the events leading up to his talk, he said that “One Book One Town” is “the best thing to happen to this book.” He said he felt absolutely honored that his book has been chosen for this event. At his talk on March 8, he hopes to discuss the story of how he came to write the book and the criticism he faced after it was published. He said, “After the book came out, I was actually criticized for some of the points I was making.”

He felt those who organized the events leading up to the talk truly understood his message. Ronson felt that the organized events “perfectly captured the themes of judgment and public humiliation.”

Leave a Reply to Tomorrow! | One Book One Town 2016 Cancel Reply