Lively, unpredictable and innovative drawings and cartoons by the famed cartoonist Edward Koren will soon bring a fresh look to the walls of the Bellarmine Museum of Art in Bellarmine Hall. Inspired by the shaggy and imaginative line work of Koren’s pieces, the exhibition is entitled, “The Capricious Line.” Koren’s career originally took off with his initial feature cartoon in “The New Yorker.” Though the title of this cartoon is unknown, the comic itself displays a disgruntled writer sitting at a desk with a cigarette hanging from his lips and the name “Shakespeare” written on his shirt. From there he went on to publish his work in The New York Times, The Boston Globe, TIME and Vanity Fair. Fairfield has access to this line of artwork, which is touring the country, and students will be able to view the artwork in the gallery from Feb. 4 until April 8.

Carey Weber, museum and collections manager explained, “This is a exhibition that we really thought Fairfield would enjoy; we even chose to have the brochure’s front cover show one of Koren’s cartoons that depicts an animal similar to a stag in order to appeal to students.”

Koren’s work is known for his satiric flare on messages that aim to address a variety of modern concerns. An example of this practice can be seen in Koren’s popular cartoon entitled, “The Most Unkindest Cut.” This cartoon aims to promote deforestation awareness by depicting a woodsman cutting down all of the surrounding trees. However, once the woodsman comes across a stubborn tree that holds its arms crossed with a pout upon its face, the woodsman is conflicted as to whether to cut the tree down or to leave it alone in order to spare its feelings. 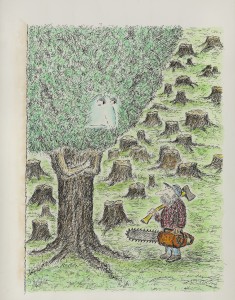 “I think everyone would enjoy and benefit from this exhibition,” said Weber. “Koren is really a social commentator. His art addresses diverse cultural and environmental issues that are very topical for a college campus.”

This exhibition was created to honor Koren’s five decades of work as a cartoonist and a graphic satirist. The exihibition will display 48 works on paper, including drawings and cartoons, as well as one sculpture.

“People who grew up with The New Yorker in their home will feel like they are seeing an old friend because his work is so recognizable,” said Weber.

Everyone is invited to attend Koren’s “The Capricious Line” gallery opening on Thursday, Feb. 4 for a conversation with Edward Koren himself along with peer artist Lee Lorenz. The conversation take place from 5-6 p.m. with an opening reception to follow from 6-7:30 p.m. Staff and students may RSVP to this event at bellarminewag.eventbrite.com.