It is a customary Fairfield tradition to recount the tale of Dolan Hall and its long history of hauntings that date back to the inception of the campus. While the stories have changed over the years, the core details remain: when Dolan was still a convent for the nuns, one nun committed suicide on the fourth floor after rumors flourished that she was to bear a child. The room number was 403 and the hauntings remain to this day.

To experience the rumours for ourselves, Brendan Zimmerman, the Assistant Vine Editor, and I voyaged to the far side of campus to explore the grounds of Dolan. While I was taking photos of the exterior to run alongside this piece, I couldn’t help but notice the eerie landscape that surrounded the weathered building. Whether it was the bare trees or the dusk-tinged skies, I felt an aura of uneasiness surround me.

As we entered the building, the tension could have been cut with a knife. The first truly unsettling moment for my companion and I was when we first called the elevator. While everything seemed normal as we charted our journey to the fourth floor, I innocently attempted to grab a picture of the elevator door opening, but suddenly, my camera turned off without me ever switching the mode. I passed this off as a malfunction, but once I tried again to the take the picture, my shutter would not respond. 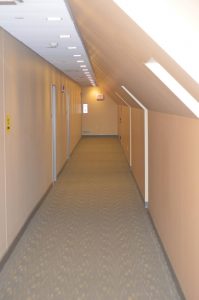 Getting some vibes from ‘The Shining?’ So did we.

Petrification isn’t the word I’d use to describe what we felt, but a certain notion of dread spread over us. Ascending to the fourth floor, we came out of the elevator not knowing what my lens would capture. The hallway was the first thing that we noticed, structured in a Kubrick-esque style design that was reminiscent of “The Shining” and “A Clockwork Orange.” During our shoot, Brendan pointed out room 403, the rumored room that is haunted by the spirit of the deceased nun. That wave of uneasiness returned after just subsiding and we felt as though someone or something was watching us from the corner of the hallway as we took pictures of the door.

When we felt as though we had enough photos that would substantiate our articles, we made a dart to go find individuals to interview since the suitemates in 403 were not available to be interviewed. As we just passed by the elevator, we noticed the door swing open automatically without anyone in it and a cold burst of air rush past us. We took note that the spirit certainly did not want us there, so we sprinted for the stairs and sought refuge on the third floor. 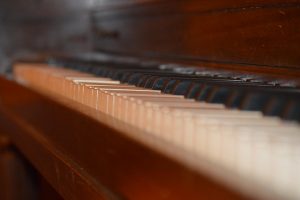 If you look closely, you can see the ghost of Keith Richards.

After a few rounds of student interviews, whom all confirmed the notions we previously had about the hauntings, we were convinced that we experienced something out of “The Twilight Zone.” To anyone willing to explore the hauntings of fourth floor Dolan, bring a buddy and a new pair of underwear. Also, prepare for a sleepless night.