After an unprecedented upset that completely overturned what the polls predicted for months, Donald Trump won the presidency.

Trump will be the 45th president of the United States of America.

“I don’t think words can explain it,” said Kenneth Kraus ‘17, who is a supporter of Donald Trump. “I’m so excited, I can’t even put words to it. We have taken our country back and I’ve never been part of such an amazing movement.”

“I trusted the American people to make the right choice and tonight they did,” Kraus continued. 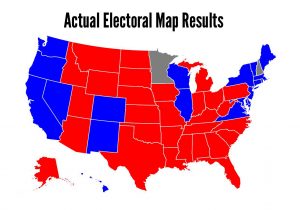 Information compiled from CNN and The New York Times

However, other students were not as optimistic as Kraus.

Sophomore Irene Havlusch commented, “I’m truly concerned for our country’s well being. We’ve just been sent back in time and we need help.”

Trump was born in June of 1946 in Queens, N.Y., according to biography.com. His career in the public eye began after he was given control of his father’s real estate and construction firm in 1971.

Additionally, Trump owned the Miss USA pageants from 1996 to 2015. He is known for hosting and producing the reality television show, “The Apprentice” from 2004 to 2015 and for making cameo appearances in movies and television shows such as “Zoolander,” “Home Alone 2: Lost in New York,” “The Fresh Prince of Bel-Air” and “Sex and the City,” according to the Internet Movie Database.

Trump had a brief stint in politics in 2000 when he attempted to be the Reform Party presidential nominee. However, he withdrew before voting began, according to Encyclopedia of World Biography.

“This election was very divisive,” said Assistant Professor of Politics Gayle Alberda. “I hope that Trump works to unite Americans and we can move forward as a nation. Given that the electoral college produced a clear winner and Clinton conceded, the election can be perceived to be legitimate. The nation can accept the results and move forward.”

The L.A. Times and The Washington Post reported that Trump’s campaign for the presidency received constant media attention in response to him publicly making false statements, violent riots occurring at his rallies and the uncovering of footage of Trump speaking disrespectfully about women and forcefully kissing and groping them.

“This election does not represent the America I know or love,” said President of the College Democrats Riley Barrett ‘17. “Donald Trump does not have the skills or qualifications to hold such a position and I’m truly saddened by his campaign’s divisive rhetoric. Hillary Clinton was the most qualified candidate, but was lambasted throughout her campaign due to her gender.”

Vice President of the College Republicans Michael Vinci ‘18 said, “I am worried that Trump winning, even though I am a Republican, will cause a lot of division in America because many people simply don’t understand his policy decisions. He is too controversial to be able to unite the country.”